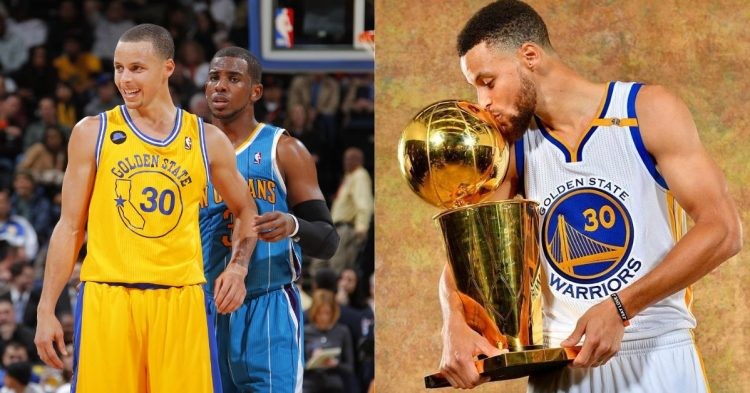 Stephen Curry is the reigning NBA champion, finals MVP, and conference finals MVP. He’s only days removed from winning it all and is probably enjoying his offseason on cloud 9. The Golden State Warriors owe as much credit to their stars as they do to their front office.

But it’s extremely difficult to imagine a world where the Warriors gave up on Curry and traded him away. Well, they did, almost 3-times.

The Golden State Warriors 2022 NBA championship roster is made up of players that were overlooked, drafted in the late first or second round, some undrafted, and some high-level prospects nobody believed in. The front office saw the potential in them and helped make a team that was offensively gifted and had the best defense in the league.

This is the recipe they have used to be successful throughout the historic dynasty. And 4 titles in 8 years is a great track record.

Steph is the greatest shooter in NBA history. But his career did not start so promising. He was already an undersized guard that was terrible at defense at a time when shooting was not everything. Couple that with the severe ankle injuries in his 3rd season and you have a recipe for disaster. A lot of franchises are quick to give up on their youth at the smallest whiff of problems.

On draft night 2009, Stephen Curry was drafted 7th overall. Phoenix, who had the 14th pick, was being managed by Steve Kerr, current Warriors head coach. Kerr might have had a gift or an intuition when it came to Curry because he offered Amare Stoudemire and the 14th pick for Steph. The Warriors declined but Steve still had his eyes on him.

Once the injuries began to roll in by 2011, the Warriors started shopping around Chef Curry. And they managed to find a deal that could procure them the best point guard in the league, Chris Paul. The New Orleans Hornets were willing to trade away CP3 for both the Splash Brothers. And GSW almost pulled the trigger until they found out that Paul had no intention to stay. They would rather keep the injury-riddled guard instead of a undetermined rental.

The Warriors also had Monta Ellis, 2008-09 MIP and a 25 point per game scorer,  on the roster. Both Ellis and Curry were undersized guards who were a defensive liability. They could not keep both of them on the floor together, so they had to pick. And they picked Steph by trading away Ellis for former number 1 pick Andrew Bogut.

Golden State had a ton belief in the baby-faced assassin and he repaid them two-fold with his 4-NBA titles.