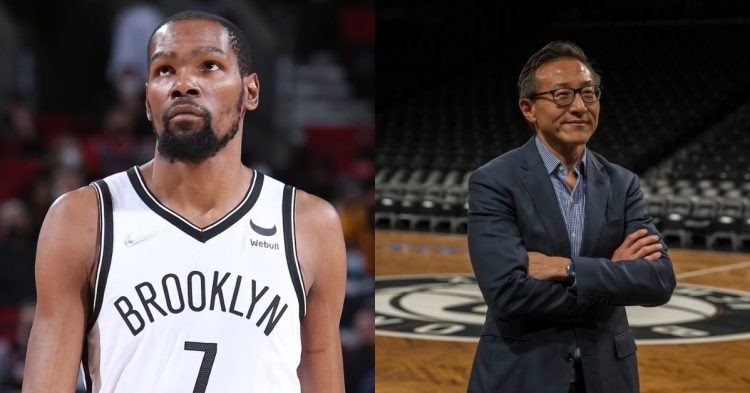 Kevin Durant submitted a trade request to move out away from the Brooklyn Nets a while ago. Since then, there have not been many updates on his trade situation. It has been more than a month since he demanded a trade. There have been many teams competing to win the race.

BREAKING: Kevin Durant has requested a trade out of Brooklyn, per @ShamsCharania

However, none of the teams seemed to have convinced the Nets board to go for a deal. Due to this, many have asked why it has taken so long for a trade. Durant is no doubt a superstar, and teams are literally lining up to acquire him. Popular TV presenter Kendrick Perkins has even gone ahead and taken a shot at the player himself. He said the trade request was a “scare tactic” to help Kyrie.

KD is a player that every team would want. That’s including the Golden State Warriors, who won their 7th title this year. Although his Warriors journey ended on a sour note, reports suggest that GSW stars are ready to welcome KD back to the team. Apart from them, the other teams interested would be Celtics, Raptors, and many more.

It seems like Kevin Durant has had enough. Reports claim that the American has decided to meet with Nets’ owner, Joe Tsai.

Source tells me Kevin Durant is expected to meet with Nets owner this week: “I have no idea what’s going to come of that meeting. There are some things that KD is unhappy about, and I’m not sure any of that gets fixed here. But maybe it does.”https://t.co/Yk0HK8sAeW

Heavy Sports’ Steve Bulpett has reported the news after getting information from a league executive. He tweeted, “He’s going to go directly to the owner, Joe Tsai, sometime this week. I have no idea what’s going to come of that meeting. There are some things that KD is unhappy about, and I’m not sure any of that gets fixed here. But maybe it does.”

Joe Tsai will be looking to ease the tension between Durant and the franchise. We all know his talent and what he can do. The Nets will surely be hoping to improve the relationship so that they can keep hold of their star player. Moreover, they know that it is not a good idea to force a player to stay. If they make KD stay, his performance level will drop. That’s not something you want for someone who is on Durant’s level.

However, the Nets guard will be hoping for the opposite. It really seems like he’s done with the franchise, and it doesn’t seem like the team is the reason. Apart from Kyrie, the Nets also have Ben Simmons on their roster.

Now Simmons may have his issues off the court, but there is no doubt that he has what it takes to perform at the highest level. However. It may be because he wants a new challenge, which is the reason he gave when he wanted to leave a title-contending team at The Bay.