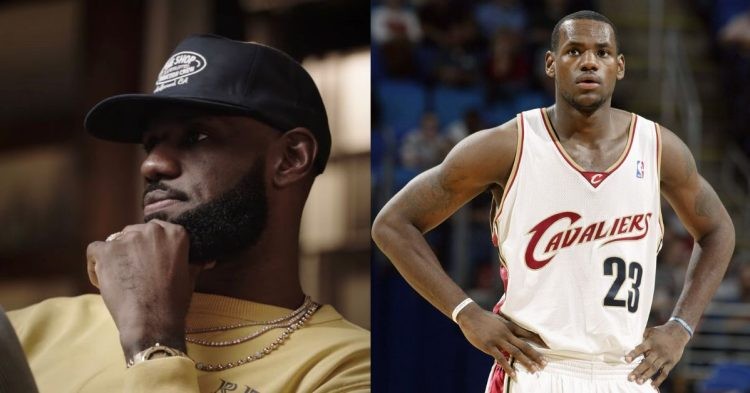 When you hear LeBron James’ name, you automatically think “GOAT”, “King”, “the best” and many more names.
No one has had the impact he continues to have on basketball ever since he joined the Cleveland Cavaliers in 2003. King James has the most championships among active players, together with Steph Curry, who joined him this year. Adding on, the way LeBron has completely transformed mediocre teams into champions says a lot about the type of player he is.

Despite all this, his career was not always bright. When LeBron joined the Cavs back then, we can say it was a mess. The Cavs missed the playoffs for the sixth straight year and could not figure out how to improve going forward. Although they improved towards the end of the season, their record was still 35–47.

LeBron has recently revealed the reason for this. In a new episode of The Shop, LeBron claimed that the Cavs had no culture when he joined the team as an 18-year-old.

The Lakers star said, “I can go back to when I was drafted at 18 and made my debut with Cleveland. You know, there wasn’t any culture.” The Cavs’ performances are explained by LeBron’s comments. Culture is an aspect that every successful team would have. How to motivate yourself and your teammates, and get back up after a loss, all fall under culture.

If a team fails in establishing culture, it is highly likely for the team to fail. He also said, “it literally is the gateway to being successful for a long period of time.”

LeBron moved on to talk about how he made an impact on the Cavs, or he felt like it was his job to do so. The 37-year-old revealed, “I felt like it was my job as an 18-year-old to try to build the culture, which is kinda unfair but it is what it is. You know, to try to build the culture, to make it seem like or make it feel like it could be something special.”

We all can relate to LeBron talking about how unfair it was for him as a teenager. At his age, it’s hard to imagine what he must have gone through, joining a team as a rookie. Although the Cavs missed the playoffs once again in 2004, they returned the following year. LeBron led them to the playoffs for the first time since 1998. It seems like he managed to create the culture he worked so hard for.

18 YEARS AGO TODAY
The Cavs selected 18-year-old LeBron James with the 1st pick in the 2003 NBA Draft!

If that wasn’t enough, LeBron also led the Cavs to a title in 2016. They came back from a 3-1 deficit in the NBA Finals against the Golden State Warriors to snatch the title. James was one of the strongest pillars of that team. The win also enlarged the legacy he created with the Cavs.