“There’s Little Hope That He Will Change” – Kareem Abdul Jabbar Slams Kyrie Irving’s Apology, Says He Is Insulated by Fame and Money 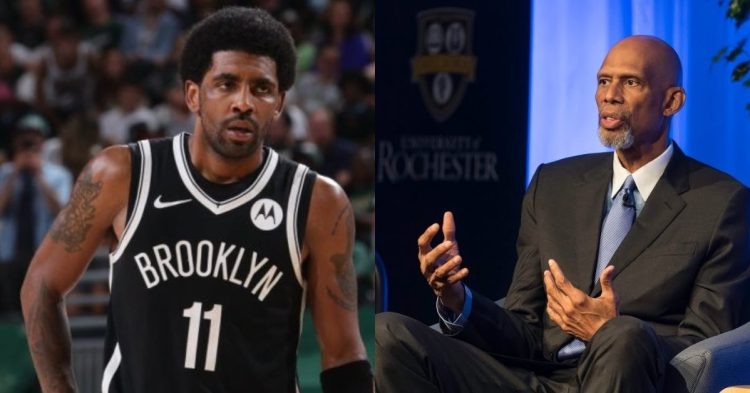 Kyrie Irving on the court and Kareem Abdul Jabbar in a suit (Credit: Twitter)

Kyrie Irving and his anti-Semitic behavior have kept the NBA media busy. It seems that everybody has a take on this subject, with the majority of them condemning his behavior and criticizing him. Kareem Abdul Jabbar is an NBA legend who recently spoke out on this subject.

We have all heard of Kareem. He is the NBA’s all-time leading scorer. He has still maintained a certain amount of relevance in the NBA world despite having been retired for decades. With that being said, we should wonder what Kareem had to say about Kyrie and the nature of his apology.

This is quite a sensitive issue. Jabbar feels that Irving being defiant about his post signifies a lack of awareness. Additionally, he accused Kyrie of picking what he liked from the buffet table without understanding the context. Here, he is clearly referring to history and Kyrie’s selective narration of it.

Kareem could potentially be holding some form of a grudge toward the Brooklyn Nets star. He even went on to claim that Kyrie was “out of step with reality“. Here is what he said on the subject. “If he really thinks someone with millions of followers spouting hate speech is the same as Jim in accounting posting on Facebook, then he really is out of step with reality.”

“There’s little hope that he will change because he’s insulated by fame and money and surrounded by yes-people. There is no motivation to learn how to distinguish propaganda from facts. All that’s left is for the world to decide how it should respond to him.” pic.twitter.com/omPTs96BhW

Moreover, the NBA legend went on to further condemn and criticize Kyrie for the apology he issued. Kareem believes Irving isn’t really sincere as there was no direct apology. Only an acceptance of the damages that were done. Thus, he concluded that there is little hope for Irving in his current situation.

“Honestly, there’s little hope that he will change because he’s insulated by fame and money and surrounded by yes-people. There is no motivation to learn how to distinguish propaganda from facts. All that’s left is for the world to decide how it should respond to him.”

Jabbar certainly raises a valid point. However, it isn’t completely fair to say Kyrie is being surrounded by “yes-people”. The Brooklyn Nets certainly said no and have decided to suspend him for a certain period of time for his recent actions.
Tags: Kareem Abdul JabbarKyrie IrvingNBA
Previous Post