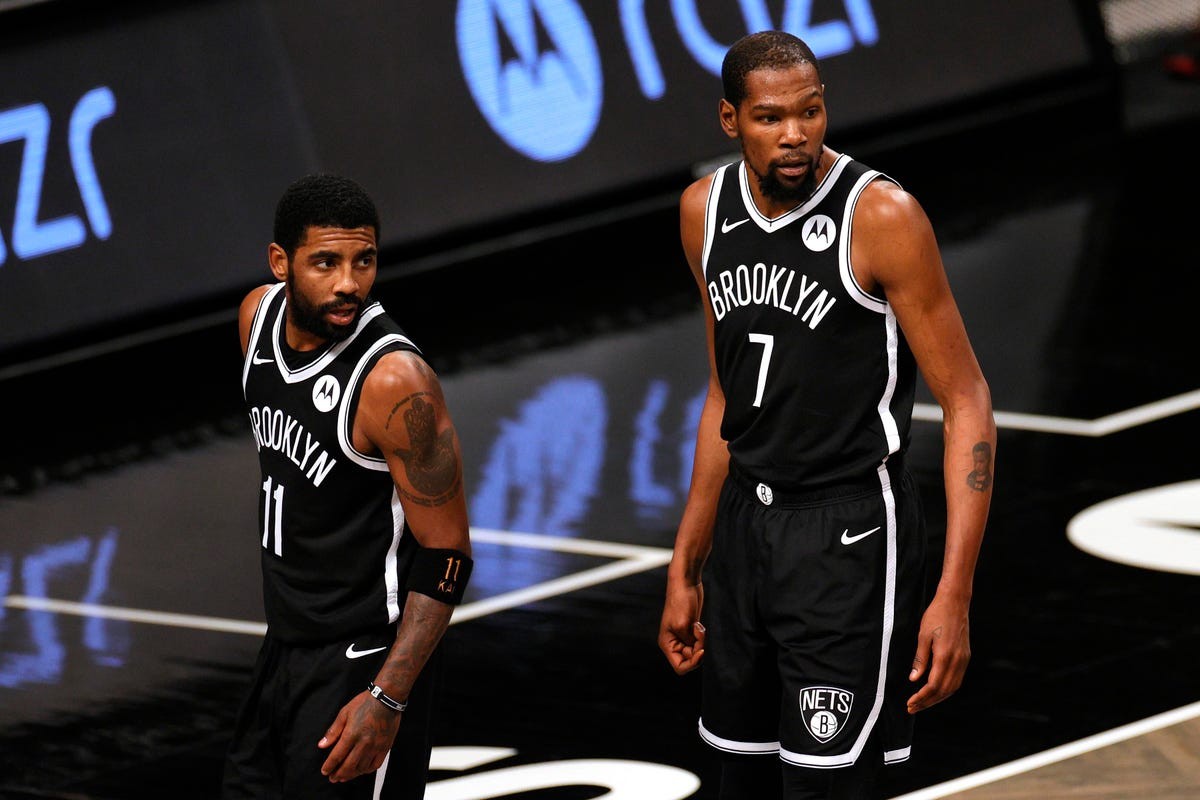 July 7, 2019, was a momentous day for the Brooklyn Nets. The team from New York signed both Kevin Durant and Kyrie Irving on the same day. Instantly propelling them to the status of serious title contenders. After long, winless years in the NBA, the Nets were finally primed to be part of the big leagues under their All-Star pairing.

Fans were disappointed as they got to see hardly any glimpse of the 2 players together. Largely due to the fact that Kevin Durant went through his recovery from the Achilles tendon injury with a lot of secrecy, building up the anticipation. The Sniper later revealed that he had decided to sit out the 2019-20 season. Irving himself also hurt his right shoulder and was consequently sidelined for the rest of the season.

It was on December 22, 2020, that the duo finally suited up together for their new franchise. In their season opener against KD’s former team, they shone on the biggest stage together.

They’re the first Nets trio to tally 20+ points in a season opener since Vince Carter, Richard Jefferson and Antoine Wright in 2007 opener vs. Chicago.

The duo was bolstered by the addition of James Harden soon after but that proved to be a false dawn.

Kyrie Irving and Kevin Durant, a duo for the ages

Consequently, Durant and Irving have moved on from the Harden saga and are looking to pull off some playoff upsets this season. In light of their renewed partnership after KD’s second return after injury, Kyrie had strong feelings.

Kyrie Irving on prospect of extending with the #Nets long term: “It has always been about being comfortable loving where I’m at, and I love it here. Once that summertime hits, I know that we’ll have some conversations; but there’s no way I can leave my man seven anywhere.” #nba

The former Rookie of the Year discussed the importance of a positive, healthy atmosphere in a team. He went on to laud the Nets and his teammates.

“It has always been about being comfortable loving where I’m at, and I love it here.”

He further stated that while contract negotiations will be a part of the offseason for him, he has no plans of leaving.

“Once that summertime hits, I know that we’ll have some conversations; but there’s no way I can leave my man seven anywhere.”

However, this is not the first time Irving has promised to not leave. And it remains to be seen if this time will be any different.