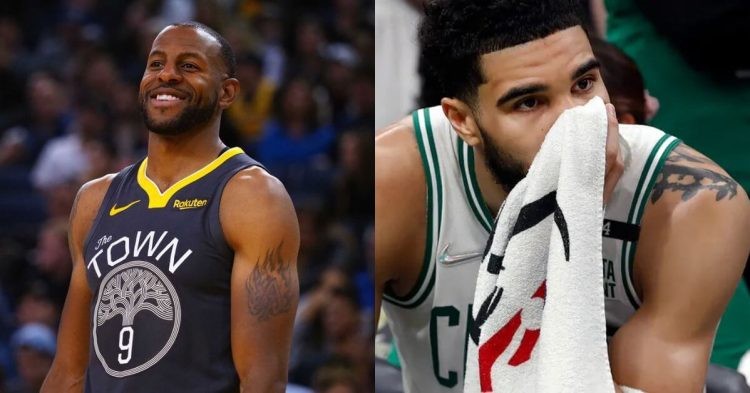 Andre Iguodala has been a pivotal part of Stephen Curry and the Golden State Warriors’ deep postseason runs in the past. He was injured in this playoff push due to neck issues and knee inflammation. The NBA veteran joined Draymond Green in a podcast, where they could discuss the NBA Finals without restriction.

The Warriors have managed to establish themselves as an undisputed basketball dynasty in the modern generation. Iggy, who won the NBA Finals MVP in 2015, and Draymond, who had the best game of the finals, scoring 12 points 8 assists, and 12 rebounds discussed how the Celtics blew their chances.

It may appear like Andre Iguodala is critiquing the play of his teammates. Maybe he was indicating that the Celtics showed some form of foolish mercy with the statement, “they let us get this one“. However, without context, this has the potential to confuse many fans of the NBA.

Andre Iguodala dismissed the Boston Celtics after they choked game 6

Jayson Tatum, Jaylen Brown, and the Boston Celtics had a 2-1 lead on the Golden State Warriors heading into game 4. They ended up losing the next 2 games and faced elimination. However, they were still favored to win Game 6 and force a Game 7. This did not happen.

Moreover, the Celtics started the first quarter of Game 6 with a 14-5 lead they took within the first 5 minutes of the game. Be that as it may, Steph and the Warriors soon chopped down this lead. Therefore, GSW was up by 5 points to end the first quarter 27-22.

This is mostly what Iggy is referring to when he says “they let us get this one“. His whole explanation makes his entire message clearer.

“I’m at a loss of words because they let us get this one and we gonna get off… they made a mistake letting us get this one-off. I was saying because you talk about how there are only so many that put a stranglehold on that entire league for this long. You know this is 75th year in NBA, 75 years when we do the 200th year it’s etched in stone, we really gonna get our s*it off.”

The former Warriors finals MVP has a point. Golden State has every reason to brag about its accomplishments in recent times. The Celtics took Game 1 and had the lead in the series till Game 4. However, they were unable to win a single game following Game 3. Moreover, they had a lead in Game 6 that didn’t last a single quarter. This is why Iggy says the Celtics “let them” get this one.