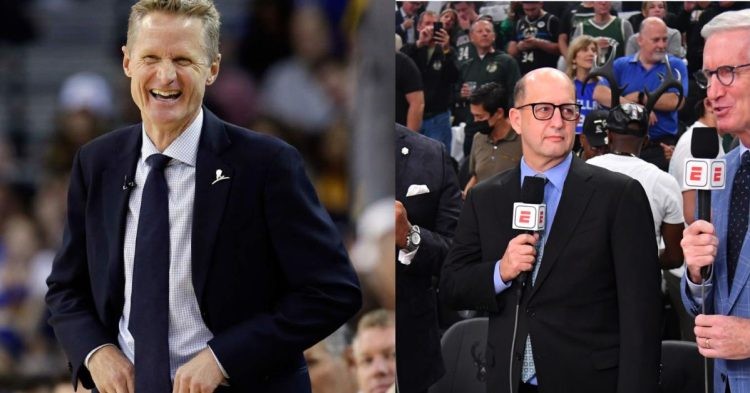 Steve Kerr is the current coach for the Golden State Warriors. He has helped lead them to 3 titles in his tenure there. Additionally, he has also won 5 championships in his playing career. Kerr won 3 titles with Michael Jordan and the Chicago Bulls. He also went on to win two more titles with Tim Duncan and the San Antonio Spurs. Kerr has made funny jokes several times in the past.

Kerr is perhaps one of the players in the NBA with the most accolades and achievements. However, what makes him a real savage is his sense of humor. Perhaps, it has gone unnoticed and unappreciated for years now. Here is the interaction between a reporter and Steve Kerr back in 2019.

The Golden State Warriors had arguably the most dominant basketball dynasty of this century. They added Kevin Durant to a team that was already a title contender. Therefore, this resulted in them crushing the LeBron-led Cleveland Cavaliers and winning back-to-back championships.

Throw back to the time when…………

Steve Kerr was a straight savage😂pic.twitter.com/qftMr9M8OP

Steve Kerr, who now understood what he was being asked clarified if the reporter meant threepeat. The reporter acknowledged that this is what he meant. Kerr, who then remembered what the initial question then responded with “ I’d be excited for either one“.

This was met with a chorus of laughter and cheers. However, Kerr did not try to insult the reporter’s lack of vocabulary. He simply turned his response into one that everyone would laugh at. Therefore, this amusing response deserves a throwback.

WWE Superstars Who Might Return at Hell in a Cell 2022 – John Cena Returns? New Contract and More