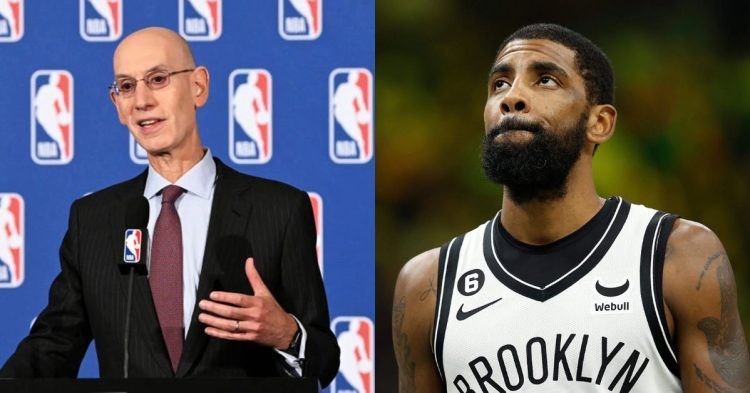 Brooklyn Nets star Kyrie Irving has found himself in yet another controversy. This time around, he has angered fans and officials for promoting a movie on Twitter that contained hate speech and anti-Semitic remarks. Kyrie‘s tweet even caused Nets owner Joe Tsai to send a stern warning to the player. However, as usual, that wasn’t received as expected by NBA fans.

Recently, the Nets fired Steve Nash amid a disappointing season so far. Kevin Durant, one of the leaders of the team, commented on the sacking, and the controversy surrounding Irving. He even mentioned that it had no effect on their relationship and that it did not change anything. The media have been giving Kyrie a hard time amid this situation, as one even tried to dehumanize what he did.

Statement from the Brooklyn Nets pic.twitter.com/699px8XYpx

Kyrie’s situation took yet another drastic turn recently after NBA commissioner Adam Silver publicly condemned his tweet. The American was also suspended by the Brooklyn Nets organization earlier today. The statement mentioned that the 30-year-old will be serving a minimum of a 5-game suspension without pay. That will be the case until he “Satisfies a series of objective remedial measures that address the harmful impact of his conduct.”

It seems like Kyrie decided to make it easier for himself by apologizing for his recent decisions.

Kyrie apologized in an Instagram post earlier today. He said, “To All Jewish families and Communities that are hurt and affected from my post, I am deeply sorry to have caused you pain, and I apologize. I initially reacted out of emotion to being unjustly labeled Anti-Semitic…”

In addition to that, the Nets guard mentioned that he should have clarified his perspective of the ideology that is shown in the movie that he promoted. Moreover, he admitted that he is against anti-Semitism as well.

It seems like Kyrie has realized the impact of his decision to promote a movie with anti-Semitic remarks. In the last few days, fans have not made it easy for him, not to mention the media. As he said in his post, he will be learning from this incident. We can only hope that Irving takes this as an experience to make sure he is better in the future.