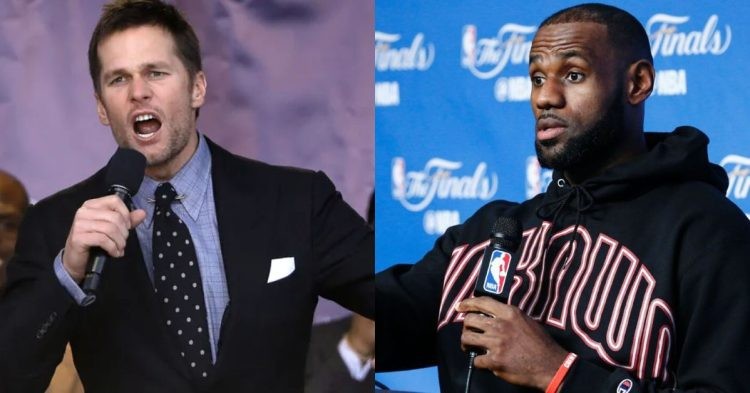 LeBron James is a 37-year-old superstar who will soon be lacing up for his 19th season in the NBA. He might not be declining but the end of his career is getting close. And King James has already set his eyes on what his post-retirement plan will be by keeping his eyes on Tom Brady and his big new TV deal.

Tom Brady is to football what Michael Jordan is to basketball. Tom Brady is regarded as the undisputed GOAT of the NFL. He’s won 7 Super Bowls and 3 MVP awards. He’s also shown great longevity by playing 22 long and successful seasons in the NFL. Being 44 years old, he’s looked to different avenues to further his income. And just like his football career, these seem to be a touchdown as well.

It is not unusual to see professional athletes remain in the world of sports even after retirement. Also, they have learned and understood the game they’ve played in a way only a few get to witness. Having them give their expert opinion on things most people don’t even get to fathom is why they are always number one in that pecking order.

Tom Brady’s knowledge of the sport of football is 2nd to none. We got to witness that on the field and now we’ll get to witness that in the studio. Tom Brady signed a 10-year deal with Fox Sports that sees him getting paid $375 Million. That amounts to $37.5 Million per year, making it almost as sizeable as an NBA player’s max contract.

Tom Brady has agreed to a long term deal with Fox upon his retirement.

The deal will make him the highest paid sports broadcaster in the world. pic.twitter.com/yfBq8ErFtN

“Would you go on TV? Like when Tom Brady signed over to TV, were you like ‘hmm’?”

LeBron’s best friend and business partner, Maverick Carter, posed LeBron a question he did not hesitate to answer.

“Yeah when I seen how much he signed for. God damm right I did. I would, I would, for sure… I want to stay around the game forever.”

LeBron James has dreams of owning an NBA team in Las Vegas. But if those dreams don’t come true, we could see the King on his talk show. His IQ and love for the sport are sure to make him stand out from the rest.

But could that put James down the road of a lot of controversy. Whatever he says, makes the news anyway but this way he’ll say things he might not be able to take back. This is all a big ‘if’ at the moment so we should just wait and see.