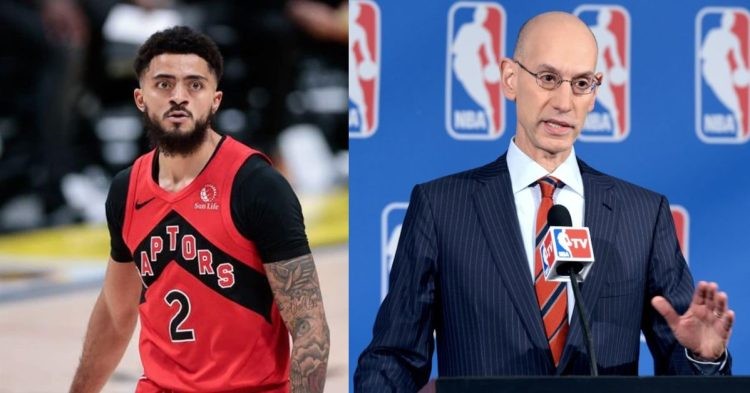 Jalen Harris is a player who was suspended from the NBA a year ago. He played one season for the Toronto Raptors in 2020-2021. Not many people know that he was suspended for testing positive for a prohibited substance under the NBA\NBPA Anti-Drug Program.

This is quite a serious situation and could be a death sentence for the career of a professional athlete. Addiction is a scary problem that ravages our society. He has been given a second chance by the league and they have granted his application to be reinstated as an NBA player.

The tables seemed to have turned for the better for Harris. We need to understand as much as possible about the situation with the information present.

As already mentioned, drugs and substances are a dark world. Few people who enter it have control over their use and fall into an addiction. The league is quite strict when it comes to using drugs during the regular season. Moreover, Marijuana is not on the list of substances banned. Therefore, by that logic, Harris was doing hard drugs.

Here’s the NBA’s list of Drugs of abuse” per the CBA https://t.co/sDAZNTyEai pic.twitter.com/IegUrfkvP0

This is quite an embarrassing situation for anyone to be in. After all, addiction is something that people should be helped out of, not condemned for. The NBA and CBA have strict rules regarding reinstatement. This means a treatment and rehabilitation program. Additionally, the player has to show conduct and be judged as someone with qualities such as good character and morality.

The NBA has reinstated 2020 Raptors second-rounder Jalen Harris, who was suspended for a year. pic.twitter.com/ZrtyUsYiiZ

In the 2020-2021 season, he showed some potential for being a second-round pick in the draft. Jalen Harris averaged 7.4 points, 1.3 assists, and 1.4 rebounds. Additionally, he shot an efficient 47% from the three-point line and 50% from the field. Harris did all this averaging only 13 minutes of playing time with the Toronto Raptors.

Thus, it makes sense that the Raptors have held onto his rights this year. He is 6’5 and weighs 195lbs. The team could always use players of that size and cultivate them into future stars. Finally, we should all hope he is out of his previous situation and followed through with his treatment. After all, he has a bright future with a career in the league.