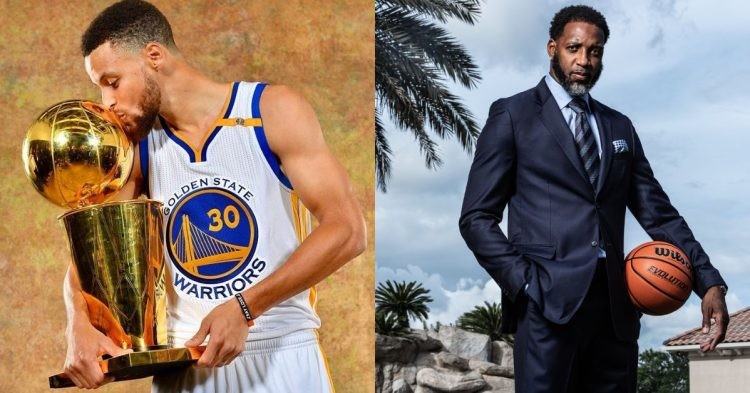 The Golden State Warriors are 3 wins away from winning their 4th NBA title in 8 years. The core players from the first championship team are still together. But the team currently in their way is the Boston Celtics. Even if Stephen Curry can win this year, Tracy McGrady does not rate him as one of the best.

Tracy McGrady was one of the best scorers in the league between 2000-2010. He had won 2 scoring titles in that decade and averaged over 20 in 8 of those seasons. He’s also a multiple-time all-star and a Hall of Famer who turned into an analyst after retiring from the league. However, he never won an NBA title himself so hearing him argue about the legacy of a player based on his number of titles won seemed ironic.

If Stephen Curry wins the 2021-22 NBA finals, he will become a 4 time NBA champion. For context, that would be equal to that of LeBron James and Shaq and double that of Hakeem Olajuwon. Those are 3 of the top-10 greatest NBA players of all time and Curry goes head-to-head with them in success.

Magic Johnson and Curry are always being debated for the best point guard of all time. And Stephen Curry’s only demerit has been the super team he was a part of. But if the only thing holding him back was great management, then this year should be concrete proof of his greatness.

“When it comes to putting him with MJ and guys that won that level of championships; Kobe and Magic, I don’t know where to rank him. I know he’s pretty high. But I think those guys are in a different class than Steph Curry.”

“When it comes to putting him with MJ and guys that won that level of championships; Kobe and Magic, I don’t know where to rank him. I know he’s pretty high. But I think those guys are in a different class than Steph Curry.” @ChaseHughesNBCS pic.twitter.com/NeGkEAXZIK

Tracy McGrady does make a valid point that Stephen Curry is not G.O.A.T. caliber and that is not something that can be refuted. But to put him in a level below those guys seems a bit harsh. Stephen Curry is a much better shooter than anyone on that list. He’s also won 2X MVP’s than Kobe Bryant won and way more points than Magic.

Is Tracy McGrady being harsh on Stephen Curry because of his old age mentality? Because if Steph Curry wins this season with the roster he has, he deserves to be in that class of players.