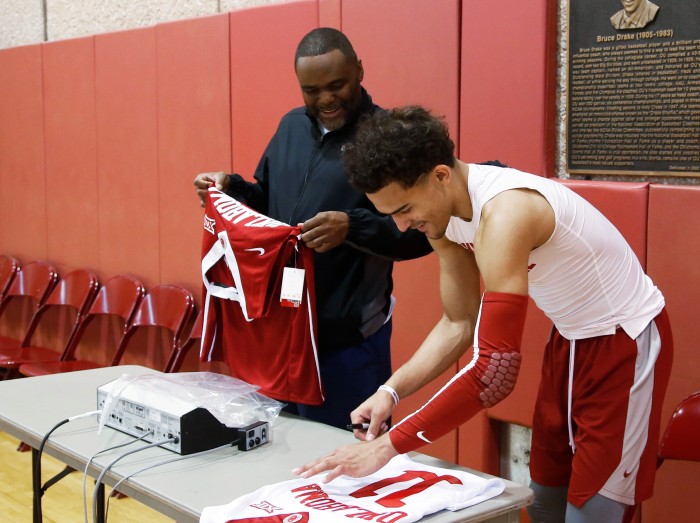 Trae Young has stadiums chanting his name as he shows off his flashy handles and insane three-pointers. But there is one person’s cheer who Trae hears louder than the others. Trae Young’s biggest fan is his father, Rayford Young. Rayford has been seen in the playoffs rooting for his son. The father-son duo shared some adorable moments as well.

The series between the New York Knicks and the Atlanta Hawks was intense. Trae Young was a villain in the Knicks home court. The Knicks Fans targeted Trae Young. Madison Square Garden echoed with chants, “F***k Trae Young.  Trae Young pulled off a stunning floater in the clutch to win the game. Young enjoyed the moment. He had shut down the arena.

TRAE YOUNG SHUT THE GARDEN UP AFTER “FU” chants during game. pic.twitter.com/9ikFZO5SMO

The highlight moment came when Papa young went crazy over his son’s game-winner. Lucky for us a Spectator in the arena caught the whole thing on camera. Rayford was extremely proud of his son. he was seen yelling his son’s name and when Trae heard the chants he reciprocated the love. Rayford was one proud dad.

Trae Young and co beat the 76ers to reach the Eastern Conference Finals. The match was extremely special for the Hawks point guard. The victory was a reason to celebrate. However, the icing on the cake was when Trae shared a heartwarming moment with his father after the game.

He was walking back when he ran back to do the sweetest thing. Trae gifted his game jersey to his father on Father’s day right after the game. The moment was special. Ray Young also received offers to sell the jersey but the proud papa wants to put the jersey up in his office. Ray Young spoke o the media about the moment. He expressed why it was so special to him.

I have a number of Trae’s jerseys from different games, but this one is really special. Earlier in the day, we talked about my dad, who passed away when he was nine. My dad actually put the ball in Trae’s hands and I was able to push that forward over the years

Trae Young also spoke about the wonderful moment he shared with his pops. He took the time to explain why the moment was so special and why Jersey was meant to be gifted only to Ray Young.

We were going to playoff games as a kid and watching them, for us to have a playoff game on Father’s Day I wanted to make it a mission to come out and win and give him my jersey

Trae Young has been on fire this postseason. He also put up a spectacle against the Milwaukee Bucks in game 1 of the Eastern Conference Finals. His dad, Ray Young was back in the arena to watch his son put up 48 points as Hawks took the 1-0 lead.