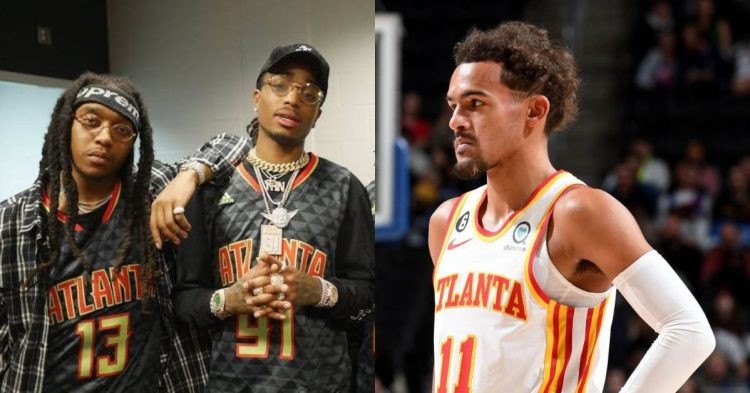 As November just started, America has been shocked by yet another piece of news. Popular rapper Takeoff was shot earlier today in Houston. According to various reports, conflicts rose due to a dice game before Takeoff was caught in the line of fire. The American was just 28 years old. He was one of the rappers who had an association with the NBA and stars of the league.

As the world mourns his loss, Atlanta Hawks star Trae Young is part of the NBA community reacting to his death. He tweeted, “No F*****g Way..” which indicated that he was caught off guard by the news. Takeoff, whose real name is Kirshnik Khari Ball, has been involved with the NBA in the past on numerous occasions.

Migos is the rapper group that Takeoff and Quavo are a part of. Together with them, another rapper called Offset is also part of the group. The three talented rappers first launched the group in 2018, when they realized that they could have a real shot at the music industry.

One of the very few times they have interacted with the sport we all love would be when Quavo played in the NBA 2018 Celebrity All-Star game. He was part of the team LA Clippers, who played against the Team LA Lakers that day.

Quavo rocked the role of a basketball player that night and bagged the MVP award at that game. He made 19 points and was the standout player on the court. Another notable celebrity who was present at the game was Michael B.Jordan, who played for the opposite team. As Quavo posed for pictures after receiving the award, cameras captured Offset and Takeoff alongside as well.

One of the other interactions that Takeoff had with the NBA would be when he performed with the rest of the Migos during a game. It was none other than Trae’s beloved Atlanta Hawks, when they faced the Memphis Grizzlies in 2017 on March 16th.