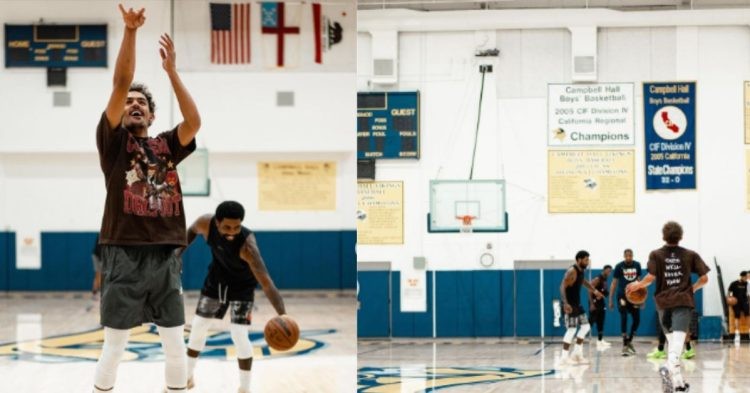 When Kevin Durant requested a trade from the Brooklyn Nets, the NBA media went into a “frenzy“. They had several speculations that were thrown out instantly on “why” KD is unhappy with his situation. Kyrie Irving and his eccentric behavior were, initially, the best theory anyone had to offer. However, Atlanta Hawks star Trae Young shared photos on his Instagram account that proves the Nets stars are as close as ever.

The photos are of him working out with several NBA players. This has become a somewhat common trend in the offseason. Both Irving and Durant were spotted in these photos. Additionally, everything seemed pleasant and it looked like there was no friction between them. We need to take a closer look at these photos and debunk the narrative spread so far.

Not to be a hypocrite, But this is a common problem with sports media these days. ESPN anchors and sports personalities make controversial statements that are quite far from the truth all the time.

“Kyrie is the leader of this team, KD is a follower“. “James Harden left because Kyrie didn’t take the vaccine“. “Kevin Durant must be sick of Kyrie by now”. These are some of the many statements that NBA analysts have made about the Brooklyn Nets stars this season. While there might be some truth to this, it is never the full picture and the media attempts to view things as black or white. After all, that makes it easier to pitch the information to an audience.

Thus, we all thought Durant and Irving would be heading their separate ways this season. Kyrie opted into his final year with the Nets just days before Durant requested a trade. This had the media making theories that there was a wedge between them.

However, these photos seem to indicate that they are on the same side and truly believe the Nets management is to be blamed. The problem here is that they never bothered to rectify the narrative spread about them. Both the Nets stars were likely to have been on the same page from Day 1.

That is because they are friends. Trae Young is also quite close to both players and posted the photos on his Instagram account. One should wonder whether he knew he was helping debunk a narrative spread by the media inadvertently.