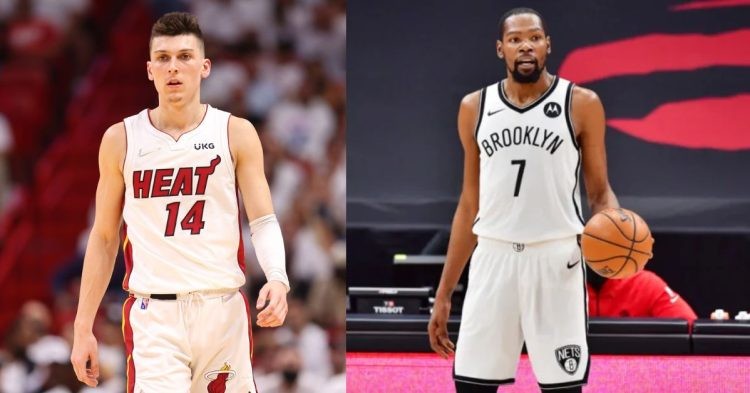 News about Kevin Durant’s situation with the Brooklyn Nets and him asking to be traded has kept us entertained this NBA offseason. Durant initially suggested that the Phoenix Suns and Miami Heat were his preferential destinations. We all know what Durant brings to the table. But Tyler Herro feels his team is perfectly suited to compete without the 2x NBA Finals MVP

One must wonder how much truth there is to this statement and whether there is any hidden agenda behind him suggesting the Heat have no use for Kevin Durant.

Jayson Tatum and the Boston Celtics swept Durant and the Nets this postseason. However, Nets’ management feels that does not diminish his value and is demanding a haul. They asked the Celtics for Jaylen Brown, Marcus Smart, Robert Williams and draft picks in return for Durant.

The Celtics obviously declined this offer as it made no sense for them in the long run. This is because trading a lot of star players in return for superstar talent does not mean guaranteed success. We all saw how the Russell Westbrook trade to the Lakers went down.

Thus, Herro feels his team would be unlikely to do the same thing. Moreover, he would be traded to the Nets as part of a package, if the potential trade goes down. Jimmy Butler has led the Heat back into relevance over the past few years. With the way things are looking, it is possible that the Nets want Butler as well to “even” the trade for Durant.

Herro explained why he was content with the way his team was, “Me, I would run it back like we are you know what I’m saying. I think that’s what we doing we brought everyone back and we were one game away from the finals so I would run it back.”

Tyler Herro knows how important team chemistry and trust are in order to win an NBA title. Therefore, he said the “right thing” by claiming that the Heat doesn’t need Durant.