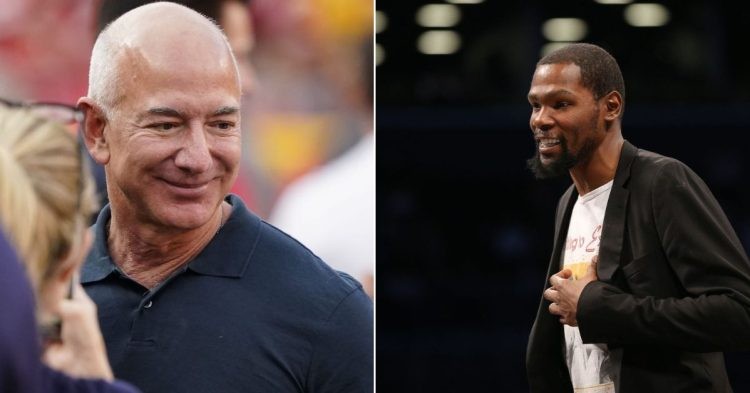 Although he is not as financially successful as Jeff Bezos, Kevin Durant has decided to partner with the owner of Amazon and purchase a team from the National Football league. NBA athletes are growing smarter and finding new ways to invest their money and guarantee financial stability.

It seems that even rapper Jay Z wants in on this action to purchase an NFL team alongside Durant and Bezos. This makes us wonder what team they all wish to become owners of and why. Additionally, we should also know what the Brooklyn Nets star had to say on the subject.

Durant has already been a fan of the team. Therefore, he shared his intent towards becoming an owner of the Commanders in an interview with ESPN.

“In a perfect world I would be part of it, I would love to do it. I would love to give a little bit of my money to be a part of the Commanders, but we’ll see. Hopefully, it’s somebody nice. I heard Bezos and Jay Z but you never know.”

ESPN: Kevin Durant may be interested in taking a stake in NFL’s Washington Commanders https://t.co/RT6eeGMPiE pic.twitter.com/CdSdZvZkQ0

KD has a net worth of around $200 million. He knew that the prices of franchises in auctions soar well above his price range. Thus, he also threw out a disclaimer before everyone got too excited and confirmed it.

“I don’t have a lot of money, though, I don’t have that much money to say, ‘Look, man, let me get a piece of the team.’ So I’m sure it would have to work out some way, somehow. I would love to, obviously, but to be honest, I doubt that it’ll happen. It’s a five- six-billion-dollar team.”

While it is certainly practical to make investments. Durant is also aware of his own financial status and limits. We hope that he is able to fulfill his team and become a part of the ownership of the Washington Commanders.