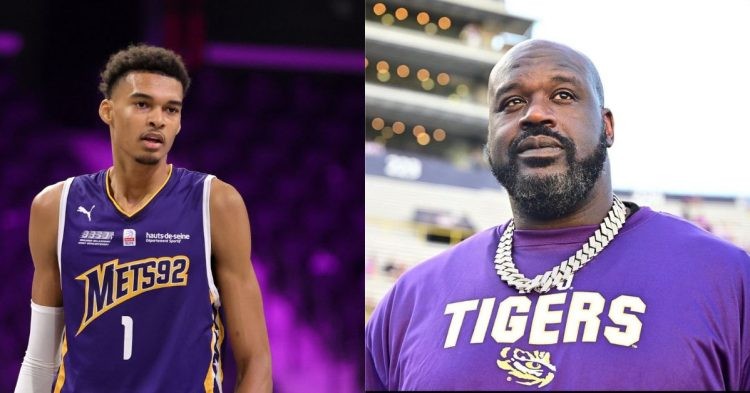 French basketball player Victor Wembanyama is one of the hottest prospects in basketball right now.

Few basketball players can dwarf Shaquille O’Neal’s presence, but Wembanyama is touted to become one of those elite players. The French prodigy stands at a staggering 7 ft 4 in at 18 years old and is 3 inches taller than Shaquille’s 7 ft 1 in height.

Wembanyama is unarguably the next immense talent to come out of the Euro League, and the NBA expects him to be the top pick in the 2023-24 NBA draft.

His play style has attracted a lot of eyes, including NBA star LeBron James who termed him an “alien” because of his talent.

His 8 feet wingspan has earned him recognition and comparison to some of the best NBA players in, Hakeem Olajuwon, Kareem Abdul-Jabbar, and Kevin Durant.

Who is the tallest player in NBA?

Victor Wembanyama will join the NBA in 2023 and fans hope to see him light up the league with his raw talent.

Yet, at 7 ft 4 in, Wembanyama won’t be the tallest player in the NBA when he joins. The title goes to Manute Bol and Gheorghe Muresan, who were 7ft 7 in tall.

Muresan had a forgettable NBA career, but Manute Bol had other ideas. Bol became one of the most intimidating players in the NBA with his almost superhuman wingspan.

According to ESPN, Bol ranks 16th among the All-Time Block Leaders with 2086 blocks. He is the only player in the NBA to make more blocks than points scored (1599 points).

One of the most unique players the NBA has ever seen. pic.twitter.com/b9xMufk0IG

Some other famous tall players in the NBA are Tacko Fall, Shawn Bradley, Yao Ming, and Mark Eaton.

With the basketball community expecting big things from Victor Wembanyama, all eyes will be on him following his long-awaited foray into the NBA. Dallas Maverick’s superstar Luka Doncic has set the standard high for foreign players coming into the league, and Victor will hope to replicate Doncic’s impact on the NBA.