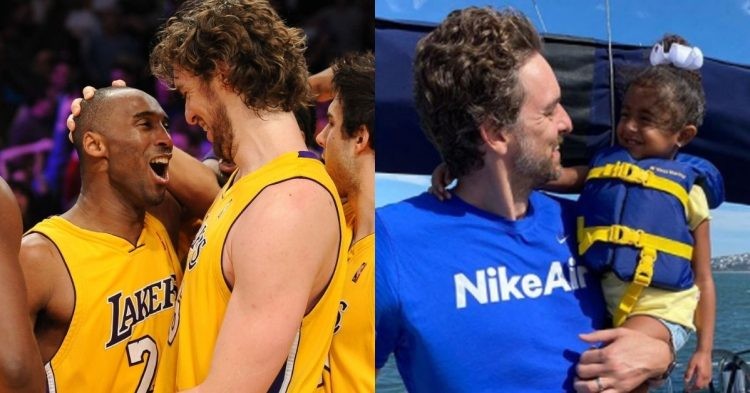 Kobe Bryant won 5 NBA titles with the Los Angeles Lakers. It began with the 3-peat in the early 00s. But if you had the opportunity to ask him, those would not have been his favorite NBA titles to win. When Kobe led the Lakers with Pau Gasol, it created another legendary dynamic duo in their history. Years after the Mamba passed away and Pau is still being Kobe’s ‘brother’ to his family.

Pau Gasol was drafted as the 3rd overall pick in the 2001 NBA draft by the Atlanta Hawks but traded to the Memphis Grizzlies. During his 6 full seasons in Memphis, he won the ROTY, made one all-star team, and averaged 18 points per game. But he was labeled as one of the softest players in the league. That helped the Lakers trade him for basically nothing and that changed the dynamic of LA’s future.

On 26th January 2022, Kobe Bryant and his daughter passed away in a helicopter accident. The accident took away Vanessa Bryant’s husband and Natalia, Capri, and Bianka’s sister. These girls are fairly young and have had to grow up with an incomplete families.

No one could take Kobe’s place but Pau is trying his best. Since Kobe’s passing, he’s been there for his family as if he was a part of it. He celebrated Halloween with them and tries to ensure they always have fun. He and his wife even take care of Vanessa. On Vanessa and Kobe’s 20th anniversary, they sent her a big rose-shaped bouquet.

The most recent example of Pau’s amazing gesture is a video of him practicing ballet with Bianka. The 7-footer attempting the graceful movements whilst towering over Bianka made everyone’s heart weep with tears of joy. And the best part about this was that Pau spent his 42nd birthday doing this.

Kobe Bryant and Pau Gasol played 446 games together. During that time, they made the NBA finals 3 times and won the NBA title twice. The first time they won in 08-09 against the Orlando Magic and then won in 09-10 against the Celtics. This duo helped each other take off labels that were assigned to them. Pau proved his playstyle won titles and Kobe proved that he could be the best player on a championship team.

This level of brotherhood that transcended the court is why NBA basketball is beautiful to watch.