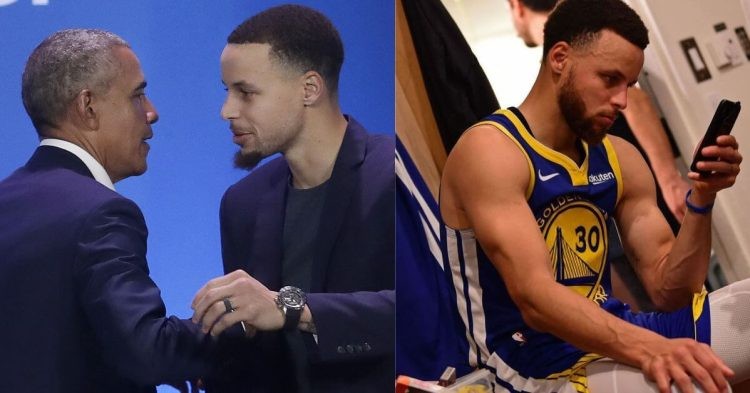 Steph Curry managed to win his 4th NBA championship with the Golden State Warriors. They have had an impact in the Western Conference ever since 2015 when they won their first title. Former President Of The United States (POTUS) Barack Obama has always been a big fan of the NBA.

It might be more accurate to say that Obama is a huge fan of the Golden State Warriors. He has invited them to the Whitehouse to celebrate winning titles during his tenure as president and even went the extra distance to socialize with the players and also crack jokes.

Obama seems to have called Curry within a few moments of the Warriors winning Game 6 and eliminating the Boston Celtics. It seems that the former president is quite close with the NBA Finals MVP.

It is important to reflect on the magnitude of what the Golden State Warriors have managed to accomplish in recent times. They are arguably the most successful basketball dynasty we have seen in the modern generation. By winning this title the Warriors have added yet another feather to a cap full of accolades.

Obama clearly knows the magnitude of what the Warriors accomplished. Therefore, he called Steph and had a private conversation following the victory. It is obvious that he was calling simply to share his congratulations.

Steph received a celebratory call from Obama after winning the championship pic.twitter.com/iMFfL1K17k

The conversation was only perceivable from one end as the NBA media was unable to get access to what Obama was saying on the phone. It began with Curry recalling the previous time they met, during his 2018 title run, and how times have changed since then. The response to this was met with laughter from the unanimous MVP.

“last time I saw you… how far away this action felt like.. Man this was special… I appreciate you“. Curry then listened to Obama’s response and burst into laughter with, “I wish I could say that on TV …aw man...”

The former President has always shown off a sense of humor and wit. Therefore, one must wonder what he actually told Steph, which would be difficult to respond to on national TV. Perhaps, Steph will reveal one day what was actually said.

Kyrie Irving Contract: Brooklyn Nets Star May Be in a Problem