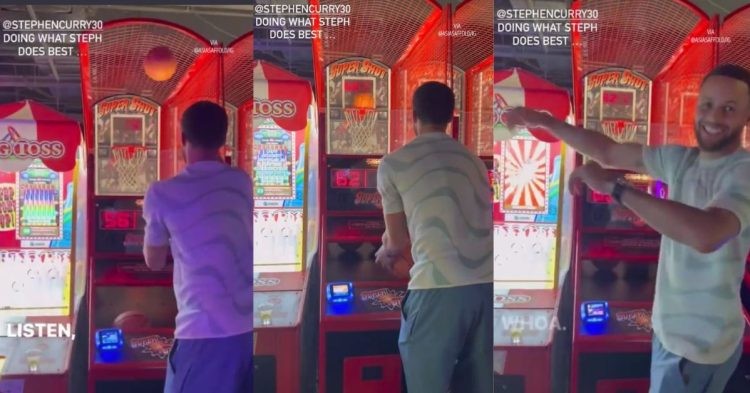 When you think of 3-pointers, you automatically think of the great Stephen Curry. He is the all-time leader for the most 3-pointers made in the NBA. He took the throne in late 2021 from Ray Allen who had 3358 three-pointers made. What makes Steph special was that he chose to pay respect and hugged Ray Allen after breaking the record. Have a look at the video here.

He sits comfortably at the top with 3678, including playoffs. Steph’s achievement was even more memorable because of one more thing. He broke Ray’s record when the man himself was in attendance, including Reggie Miller and his father Dell Curry. All these three players were the best shooters the game had ever seen till Steph came along.

Steph Curry has proven yet again why he’s the best shooter to ever grace the game. He could be the king of 3s, but he will still make sure to keep going for them. An Instagram video emerged where the Golden State Warriors star made a whopping 62 points in Pop-A-Shot.

His haters may argue that it’s just an arcade game and that it’s too easy for a professional basketball player. However, his shooting form looked so effortless in the video. That’s when you know a player has done something right for so long that he gets it right every time he does it afterward.

That’s not all Curry did in the arcade, he also went head-to-head with his wife Ayesha in Connect Four, but in a basketball version.

The Chef has continued his extraordinary shooting even after breaking the record. The American played a pivotal role in the Warriors winning their seventh championship. He performed for them in style during the 2022 NBA Finals. In six games in the finals against the Boston Celtics, Steph made 31 three-pointers.

If that wasn’t enough, he had a 43-point game in Game 4. His wonderful performances helped the Warriors get their rings, but the 34-year-old also managed to bag himself a Finals MVP, his first ever.