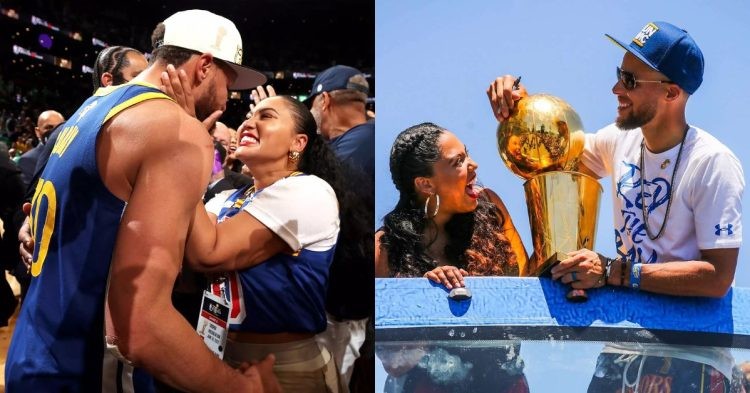 There is only a couple of things that can trump the feeling of winning. And that feeling is celebrating your win. On the 16th of June 2022, the Golden State Warriors won the NBA title. It’s been almost a week and the party has not stopped. Stephen Curry along with his wife Ayesha are enjoying their time in these celebrations.

The Golden State Warriors are used to the winning feeling. In the last 8 NBA seasons, the Warriors have finished half of them with a ring. They are a living dynasty of the modern era of basketball with their sharpshooting offense and small-ball defense. And the way they’ve revolutionized basketball has helped them get rewarded with multiple rings and trophies.

What they gonna say now??? pic.twitter.com/4dV4iT69ZH

Stephen Curry gets Ayesha hyped in the championship parade

Steph Curry got drafted into the NBA as the 7th overall pick by the Golden State Warriors in 2009. A couple of years later and Curry picked up his first ring, the wedding ring. Ayesha and Steph tied the knot on 30th July 2011 and have 3 children to show for it. They’ve been together for the entire rise of the Warriors dynasty, the fall, and then climb back up. This is why each win for the team is a win for her too.

The Golden State Warriors made the NBA finals with their objectively ‘weakest’ team in all their finals appearances. However, this meant that this group of individuals had a lot more to prove. Also, having the expectations to revive a dynasty against the hottest team in the NBA does lead to motivation.

Boston had almost trampled the dreams of the Warriors by taking a 2-1 lead against them. Everyone must have begun to count them out but the Warriors did not give up. The Warriors won 3 games in a row against the tough crowd of Boston. They won their title and Steph won his first-ever finals MVP. He took a minute to let that feeling sink in.

However, it did not take Curry long to get into the celebrations. Ayesha Curry was seen ‘getting freaky’ with the Finals MVP trophy but also enjoying her time at the club. The celebrations carried over to the championship parade. Stephen Curry had Ayesha on top of the bus partying with the team. There is even a clip of her popping champagne from the top of the bus and just having fun.

Could the celebrations turn double and carry over to next year as the Warriors attempt to repeat for the NBA title?