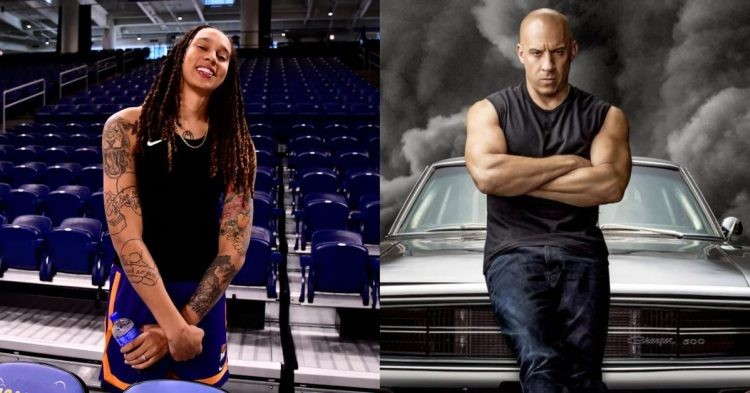 NBA fans are praising American actor, Vin Diesel, for the release of WNBA star Brittney Griner. Fans must certainly be aware of the drama surrounding the arrest of Griner. She was imprisoned in Russia all the way back in mid-February for carrying marijuana vape Cartridges through an airport.

Despite a lot of public disapproval over the sentencing of the star, she was supposed to be in prison for around 9 years. We even heard that she was transferred to a Penal Colony a few weeks ago. However, after several months of negotiations and discussing potential prisoner swaps, she has been released in exchange for a Russian arms dealer Viktor Bout. Here’s why Diesel is being given the credit.

The Fast and Furious movie franchise actor was one of the people who spoke out in support of Griner. In fact, he even sent out an ultimatum demanding that she should be returned home by Christmas. However, he soon deleted the post soon afterward.

Vin Diesel on his way to Russia to save Brittney Griner: pic.twitter.com/r4LzAB4rjN

In any case, NBA fans think his speaking up might just have made a difference and fast-forward the process of releasing Brittney Griner in a prisoner swap, “Can’t wait to tell my grandchildren that Vin Diesel personally went to save Brittney Griner lol”.

Vin Diesel really got Brittney Griner out, ain’t that some shit pic.twitter.com/dV5kEDDQFD

Fans know the actor’s history with action movies, “He drove there straight in his Camaro.” All of this is amusing and all. However, people are seriously entertaining the notion that this has the material to become a good movie in the future.

he drove straight there with his camaro

Clearly, Vin didn’t have anything to do with Brittney Griner being released. The United States administration has been engaged in prisoner exchange talks for a while now, since July.

Finally, both countries were able to come to terms as President Joe Biden agreed to sign the release of notorious arms dealer Viktor Bout in exchange for WNBA star Brittney Griner. Russia has sought Bout’s release for a long time. While a certain section of American society has expressed their approval of the decision, a larger part has shown dissent towards exchanging a “terrorist” for the NBA star, even holding Joe Biden accountable for hypocrisy.

In any case, we are certain that he is quite happy that Brittney Griner has now returned home after spending more than 10 months in prison.