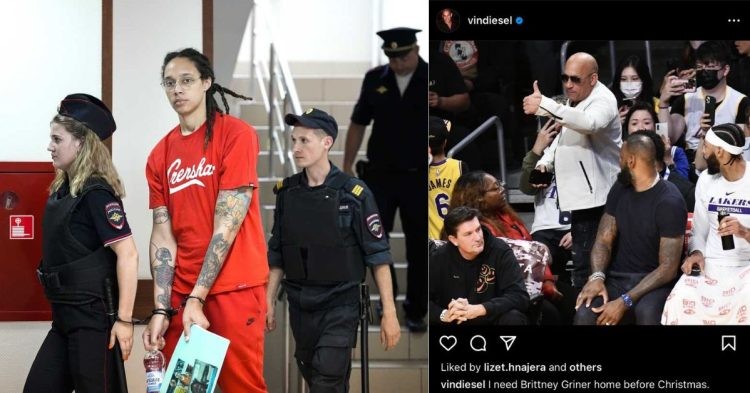 Vin Diesel holding a thumbs up and Brittney Griner being arrested (Credit: Twitter)

American actor Vin Diesel recently decided to make a post and take a stand supporting Brittney Griner. NBA fans are aware that the WNBA star is currently imprisoned somewhere in Russia for carrying Marijuana Vape Cartridges through an airport. This crime has earned her a 9-year sentence despite her decision to plead guilty.

We are all familiar with Vin Diesel. After all, he is quite famous for his role in the “Fast and Furious” franchise. Considering that some people are sympathetic to Griner and others are not, we should wonder what Vin’s stand on this issue is and the context behind his post. Moreover, knowing the background behind this Christmas Ultimatum and why he deleted it is also important.

Most of us are familiar with how Christmas is a very important festival and occasion in the West. Griner was arrested on February 17th of this year and has spent more than 9 months in prison. While she might have been guilty of the charges, this long term of imprisonment and isolation was considered too severe by many.

She is yet to spend a Christmas away from the people and place she remembers. This is a time for being with family. Speaking of family, Vin’s character in the Fast and Furious series is quite passionate about the notion of family.

Therefore, it certainly makes sense for him to feel the urge to speak out. He posted a picture of him holding a thumbs-up with the caption ” I need Brittney Griner home before Christmas”. Additionally, this photo was taken at a Lakers game with LeBron James and Anthony Davis turning around to face him.

In any case, we know that the actor soon deleted this post from Instagram. While we have no clear reason why it is possible he felt pressured to remove or take back his strong stance on this issue. Since he used the word “need” in his post, it creates a vibe that he is sending out an ultimatum and trying to force the hand of the Russian authorities.

It is certainly unclear whether that was his goal, or whether it would have worked. Before he deleted the post, it was already captured and shared across social media. That is how most of us know this even happened.