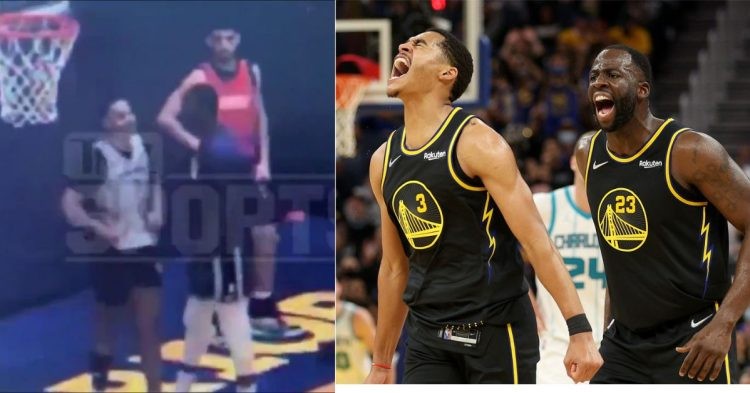 The Golden State Warriors may be the defending NBA champions. However, it seems they still have a long way to go as far as team chemistry is concerned. Warriors veteran Draymond Green got into a physical altercation with fellow teammate Jordan Poole recently.

This news broke out like wildfire and we had to presume a lot initially. Now, a video has been released on the internet showing unseen footage of Draymond attacking Jordan Poole.

As you can see, it looks quite disturbing and Green is likely to be reprimanded and face repercussions for this. We should thoroughly look through this situation to see how Golden State plans to handle this moving forward for this upcoming 2022-2023 NBA season.

There is no arguing that Draymond has his uses. He is a gritty defensive-minded player and also an advanced playmaker. His abilities on the court truly complement the Splash Brothers Stephen Curry and Klay Thompson. However, this act of violence against the third potential Splash Brother will not go unnoticed.

All of us are familiar with how NBA contracts work. Players are given a fixed amount of money for a certain time period and then eventually become free agents open to the league marketplace. Initially, Draymond made it clear that he felt like he deserves nothing short of a maximum contract.

The Warriors franchise is also in quite a predicament. They have to make a complicated decision moving forward. On one hand, they could keep the veteran core together with max contracts. On the other, they would also want to look toward the future and secure potential stars on their roster.

In any case, it will not be easy to choose between Jordan Poole and Draymond Green. This is because they are different players and bring varying skill sets to the table. Both of them will be protected by the Warriors as valuable members of the roster. However, it is not unfair to say that Poole is worth more to GSW at this early stage in his career.

However, we should not dismiss the bond between Stephen Curry and Draymond Green. Splitting them could make one unhappy and compromise the chemistry of the team in the locker room further still. While Draymond is expected to be reprimanded and punished, we are certain GSW will move on from this incident and look forward to defending their title this NBA season.