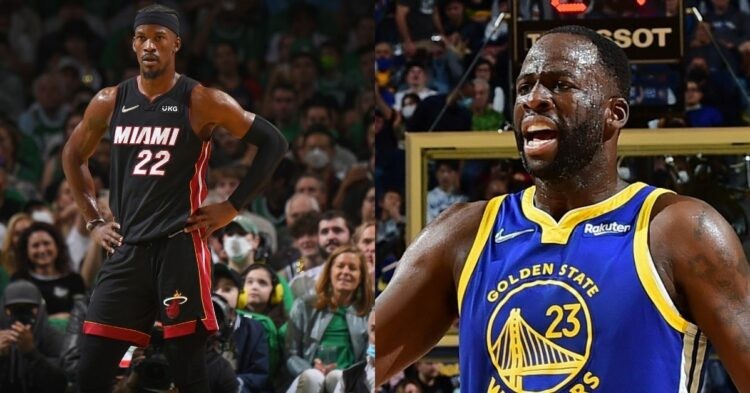 Miami Heat proved the NBA World wrong by defeating the Boston Celtics to avoid elimination. Unlike Game 5, where all the starters combined had 18 points, everyone stepped up. Jimmy Butler had a historical night scoring 47 points and dishing out 8 dimes. After the game, he had some words for the Warriors’ Draymond Green.

Heat and The Cs went back and forth throughout the game. After the first half, it looked like Boston was set to advance to the NBA Finals. However, Jimmy Butler had other plans. He single-handedly pushed the series to 7 games to give Miami another chance at winning the title.

Whoever comes out alive will face well-rested Golden State Warriors. Draymond Green made some bold predictions in an interview with the TNT crew. Jimmy Butler is on a mission to prove him wrong.

The Golden State Warriors did not blow another 3-1 lead and sent Luka Doncic and co home in Game 5. They are the Western Conference Champions and expected to face Boston Celtics in the Finals. Although Miami had the #1 seed, The C’s have odds in their favour. This is the second straight Game 7 for Jayson Tatum and first for Miami.

Draymond Green was quick to rule the Heat out after Boston took a 3-2 lead. Green either knew exactly what he was doing when he said that publically or has a dog fight coming his way if Miami advances.

After his 47-point outburst, Jimmy Butler thanked the Warriors forward for dismissing Miami. Clearly, it worked as the right kind of motivation for them. The Heat is very much capable of defeating the Celtics despite predicted odds.

Udonis Haslen to @Money23Green, who predicted the Warriors would face the Celtics in the NBA Finals 😤pic.twitter.com/xecr1CFVsW

PJ Tucker was also of the same opinion and appreciated Draymond Green’s bold prediction that motivated them to force game 7.

PJ Tucker: “Tell Draymond I said I appreciate it.”

In the event that Miami Heat reaches the NBA Finals, the Warriors will regret Draymond’s words.