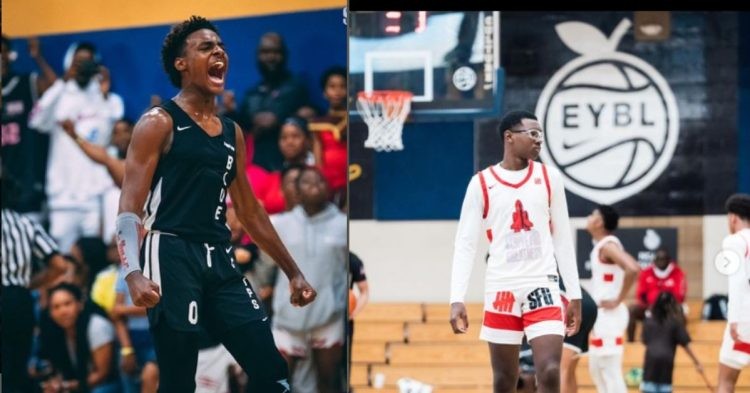 Every NBA fan knows who LeBron James is. This season, he will have been in the league for 20 years and is a 4x NBA champion. Additionally, the King has made the NBA Finals 10 times in his career. Despite these amazing accomplishments on the court, LeBron is most proud of his two sons. Bronny and Bryce are both showing that they have the talent to be future NBA players.

It is still too soon to say that they are one and done, ready to compete with their father and the best players in the world. Nonetheless, the world saw both of them display their skills at the Axe Euro Tour, a part of the European world win tour. One must wonder how the children of “The Chosen One” did and whether their team got the win. Bronny is 17 and Bryce is 15. Therefore, what we see is just a small preview of the things to come in the future.

This particular tournament was held in London and had a packed audience. Bronny and Bryce were representing “CBC” (California Basketball Club). The team they were facing was called “Hoopsfix“. The James children and CBC ended up losing  74-81. It is important to understand losses, just as much as wins. Therefore, we should analyze what they displayed in this professional tournament.

Bronny started the scoring for his team and showed off his athleticism with a drive to the rim that he completed while being fouled. A few possessions later, his teammates found him and passed Bronny the ball. James braced, drove the ball, and finished in a very similar to how he just did. This was to give his team an 8-4 lead.

He was then sidelined as Hoopsfix began to take a commanding lead with their three-pointers. He soon returned in the second quarter and helped his team by knocking down an elbow jumper to give CBC a 28-20 lead. Bronny then got an open layup running to the rim to increase the lead to 35-28. Moreover, LeBron James’ oldest son was able to read the defense and make pivotal passes to his teammates.

CBC lost this lead to Hoopsfix, who came thundering back with fast-paced transition basketball in the second half of the game. There were several highlights and top-quality basketball plays in the match. We shouldn’t hold this loss against Bronny as he did not play much of the second half.

If you are wondering about Bryce, he was subbed in at midway during the third quarter. However, he did not have many highlights as he is still to develop into a full-fledged professional basketball player. If one or both of these brothers make the NBA, LeBron James will be quite the happy father.