Watch: Michael Jordan Embraces Luka Doncic in a Moment for the Ages for NBA Fans at the All-Star Game 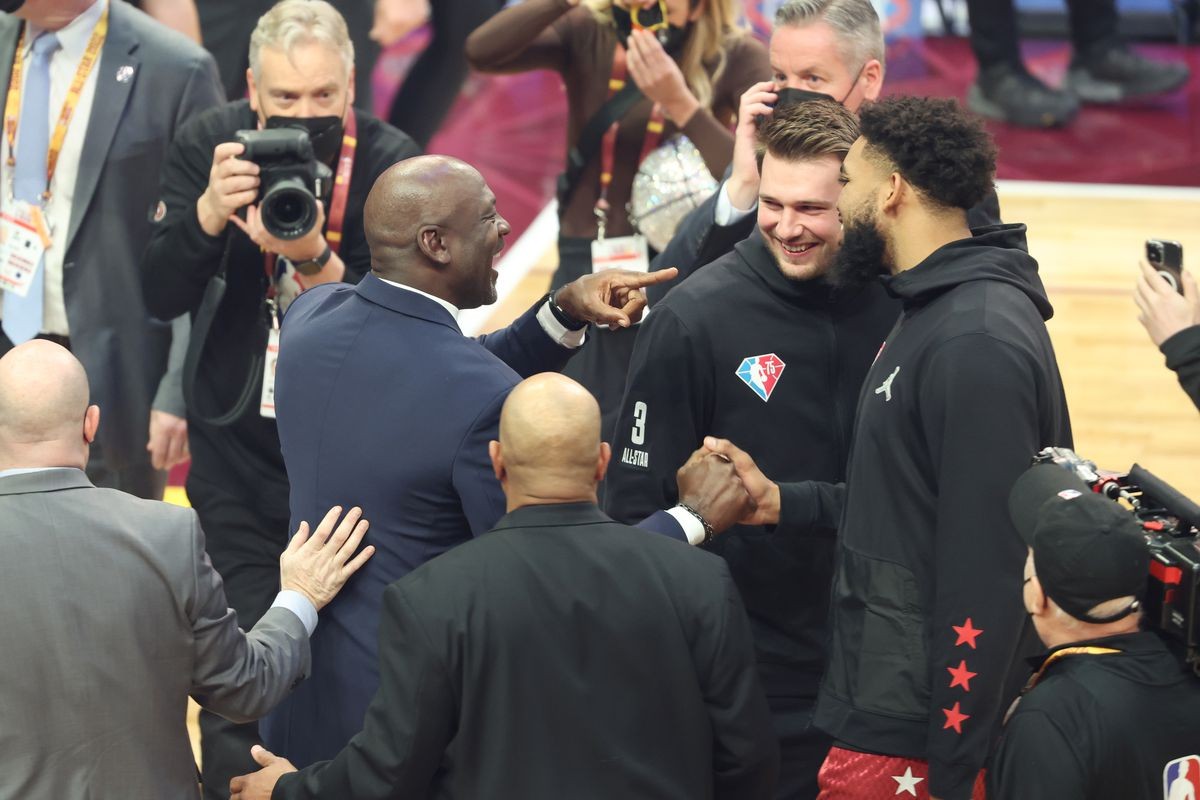 The 2022 NBA All-Star Game between Team LeBron and Team Durant just concluded. It was a resounding success with over $3 million raised for charity by the 2 teams. Team LeBron took home 2 of the 4 quarters, while one was drawn and another went Team Durant’s way. Luka Doncic was the first reserve of Team LeBron and he played a chilled-out 25 minutes.

This was Luka’s first appearance at an All-Star game as a reserve. He previously started both of his All-Star selections for the same team, Team LeBron. The 22-year old scored a total of 8 points, which included 2 back-to-back 3-pointers that he drained within his first minute on the court in the 1st quarter. He also added 3 assists to his stat line to contribute to Team LeBron’s 163-160 win.

Luka Doncic and LeBron are now undefeated when together in the All-Star game, with 3 wins on the trot against Team Durant twice, and Team Giannis once. Luka has scored 8 points in all 3 games but supplied over 15 assists in total. While LeBron’s favoritism is well-documented, someone else also showed some love to Luka Doncic. And not just someone else. The Michael Jordan.

It was presumed that Jordan would be missing the All-Star game and his felicitation as part of the NBA 75th Anniversary Team. He was spotted at Daytona 500, supporting his team, 23XI. However, MJ made it back to Cleveland just in time for the mega halftime presentation organized by the NBA.

His arrival at the game was met with much excitement. Clips of him interacting with and meeting his fellow anniversary teammates and other high-profile basketball players did the rounds. An embrace with LeBron James was the pick of them all. But only one other player got the same warmth from the GOAT, and that was Luka Doncic.

Jordan surprised Luka with a squeeze and then dapped him up. Asking him how he’s been, MJ told the Dallas Mavericks guard to stay healthy.

Luka who is signed to the Jordan label for a massive sneaker deal has long been coveted by MJ. Jordan is known to be selective with his praise, and the uncharacteristic show of affection for Luka is very telling. Doncic himself was overjoyed at his moment with Michael. He gushed about being rendered speechless by the love shown to him.

“It’s amazing, I don’t know how to explain that moment. Just an unbelievable moment. I have no words for that.”

Luka Dončić on meeting Michael Jordan: “It’s amazing, I don’t know how to explain that moment. It’s just unbelievable. MJ knows my name, it’s a lot. Just an unbelievable moment. I have no words for that.”

Both LeBron James and Michael Jordan, the top 2 to have ever played basketball, are very much on the Luka Magic bandwagon.  The question is, who in their right mind is not?