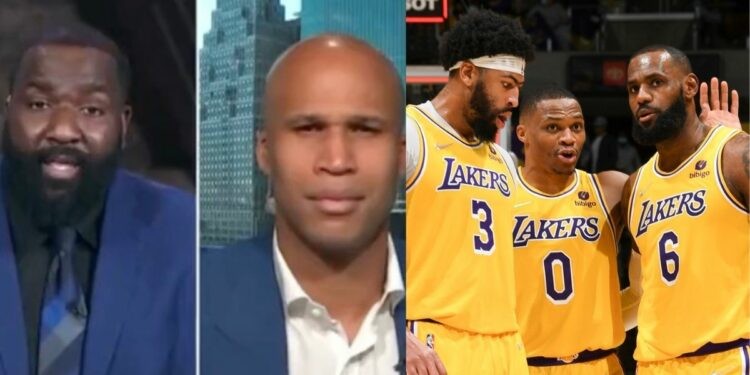 The Los Angeles Lakers had the most disappointing season of anyone in the NBA. They failed to live up to the expectations and underperformed massively. The trio of LeBron James, Russell Westbrook, and Anthony Davis that seemed unstoppable on paper fell limp as the season unraveled.

In the offseason, the Los Angeles Lakers’ acquired multiple veterans and traded away the last of their younger players. Kyle Kuzma and Alex Caruso left the franchise, and in came Russell Westbrook, Carmelo Anthony, and Rajon Rondo. With multiple All-Stars on the roster, and a championship-winning coach in Frank Vogel. title contention did not seem far-fetched.

Except, this is basketball. And it’s one thing to build a roster, and another to get it to click on the court. Frank Vogel could not get his imprint on this team like the 2020 championship-winning team. And former MVP Russell Westbrook failed to replicate his previous numbers as he fought through heavy media criticism.

The media and fans hounded the Lakers as they demanded better results from a team as promising as theirs. Constant media focus on the team may have also added to the pressure of their already poor results. Subsequently, the Lakers did not even make the Play-In tournament and ended their season early.

Jefferson and Perkins are tired of the Los Angeles Lakers

Part of the media ensemble that constantly reacted to the Lakers’ season and the lows were former players Richard Jefferson and Kendrick Perkins. Perkins and Jefferson, the players turned analysts, are co-panelists on ESPN’s basketball talk show, NBA Today. They have covered the Los Angeles Lakers all throughout the season.

Lmao @KendrickPerkins and @Rjeff24 are TIRED of talking about the Lakers 😭😭pic.twitter.com/yxlKdpeMX9

On the show, the host brought up the situation around the Lakers’ search for a new head coach. This is due to the Lakers firing Frank Vogel after 3 years at the helm. Kendrick Perkins and Richard Jefferson visibly and audibly sighed their disinterest in the topic. Evidently, the duo’s interest in talking about the team has vaned.

A well-documented team that has offered up nothing but disappointing news all season long must be difficult to cover. And take it from me, someone who has to write about the Lakers’ struggles far too many times this season. And I hope they turn it around solely to not have to continuously discuss their issues this season.