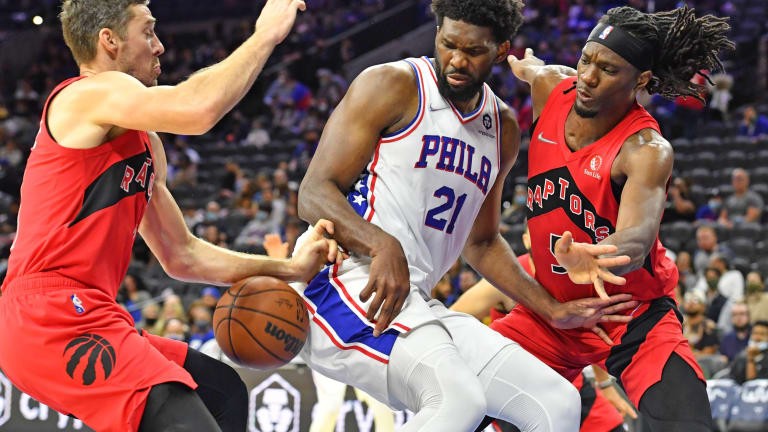 He is one of their biggest fans and always sits courtside to encourage his team. Drake also engages in trash talk, much like any NBA player. However, this led to a hilarious interaction between him and Joel Embiid at the end of game 2.

Drake and Joel Embiid have a funny exchange

The funny thing about trash talk is that there is always a past and history involved in it. In the case of Drake and Embiid, this has gone back to 2019. The Philadelphia 76ers faced Kawhi Leonard and the  Toronto Raptors in 2019. Despite having Jimmy Butler and Ben Simmons to pair with Embiid, the 76ers lost that series albeit narrowly.

Drake took the moment to absolutely ridicule Embiid by imitating his “airplane celebration”. Additionally, drake did so, back in Toronto with the fans jeering at the situation. Therefore, Joel has been looking to get back at Drake and the Raptors for years now.

This seems to be Embiids year. He carried the 76ers early in the season. Additionally, he did so when Ben Simmons refused to play and requested to be traded to another team. Finally, he has been paired with a superstar caliber teammate in James Harden. This allows him and the 76ers to have enough offensive firepower to make a deep postseason push Additionally, he is an MVP front-runner and has been absolutely dominant this season.

While leaving the arena Embiid saw Drake and took the opportunity to exclaim and state ” get your a** out too, I’m coming for the sweep” making a bold prediction that he was about to end this series in Toronto. Drake who was impressed with Embiid’s recent performance could only smile and respond with ” Ah, I’ll be there”.