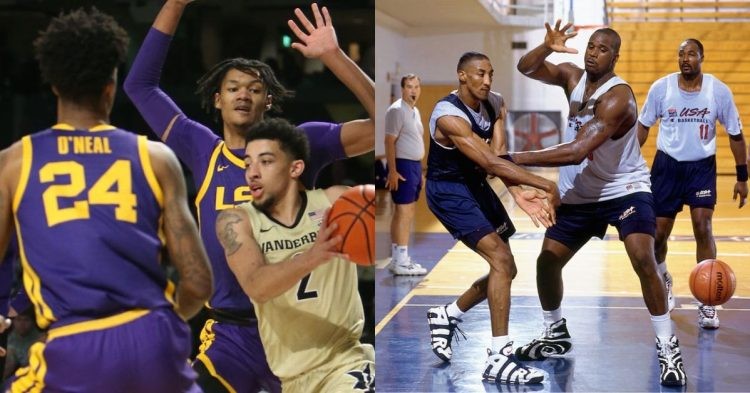 In its 75-year history, the NBA has housed the greatest basketball talent in the world. Players have been able to revolutionize the sport through their play and larger-than-life personality. However, there has been a time when they’ve had to retire but they still have not had a successor worthy enough to be called the next. Scottie Pippen and Shaq got the great opportunity to see their sons score their first NBA points tonight for the Los Angeles Lakers.

The first game of the 2022 California classic summer league tipped off with the Los Angeles Lakers taking on the Miami Heat. But there were not any big NBA rookies of the 2022 draft class playing in the game. The Lakers had just one pick from the 2022 draft, Max Christie. He has been the victim of a lot of backlashes. Along with him, the Lakers also added Shareef O’Neal and Scotty Pippen Jr. to the roster. Both of them went undrafted.

However, the lack of talent did not reflect in the game. The Los Angeles Lakers won the contest 100-66, a 34-point win. Mac McClung leads the scoring with 17 points on godly percentages. Paris Bass and Cole Swindler scored 28 points together. Ans Scotty Pippen Jr. scored 14 points whilst grabbing 6 rebounds on +/- of 19.

His first points came on a tough finish at the rim in the 3rd quarter of the game.

Scotty Pippen Jr. getting it done on both ends of the floor!

Shareef O’Neal played the game on the minutes of a reserve and he only got into the game late in the 1st quarter. But just like his dad burst onto the scene instantly, he scored his first NBA points fairly early.

Shareef O’Neal going to work in the paint for his first bucket as a Laker!

The 2022 California Classic is Live Now on ESPN 2 pic.twitter.com/yFAZBHNP5D

Shareef O’Neal began that play with his beautiful off-ball screen and was rewarded with the pass to finish. This is something that only players with a chip on their shoulder showcase in the summer league. Despite all the added pressure these players have had to go through, they are trying their hardest to find a place in the league.