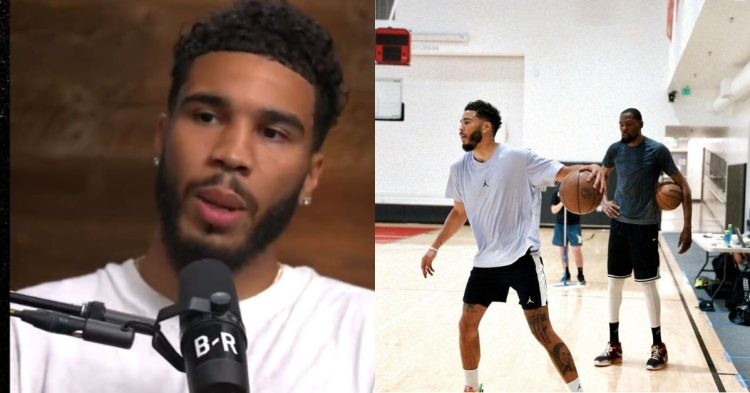 Jayson Tatum is coming off the best year in his career and his first trip to the NBA Finals. The Boston Celtics proved that they are a force to be reckoned with. They did so by initially sweeping Kevin Durant and the Brooklyn Nets in the first round of the eastern conference.

We all know what happened after that. The Celtics made it all the way to the NBA Finals and lost in 6 games to the Golden State Warriors. Soon, KD requested a trade from the Nets this offseason, and Boston appears to be one of the teams bidding for the 2x NBA Finals MVP.

The Nets and Celtics entered trade discussions for Kevin Durant, per @ShamsCharania

None of this outside world noise should get into the heads of the players who love the game. Tatum was last seen at the CrawsOver Pro-Am tournament this offseason. He described his personal bond with Kevin Durant despite the rivalry as players.

The Celtics star explained how the media twists narratives to pit superstars against each other in the league. Everybody loves the game and wanting to get better in the NBA offseason should be near a primal urge for an NBA star.

Jayson described how deep his bond with KD actually went. Additionally, he broke down why he decided to take the opportunity to play with Durant despite how it would “look” in an interview with Taylor Rooks.

“It goes back to your earlier question like what do you give up being Jayson Tatum? Like they exaggerate everything I do right. I’ve known KD since I was in high school. We were on the USA team together. We spent 5 weeks together last year from Vegas to Tokyo,  we won a Gold medal. You know we have a bond like that’s my brother.

Tatum went on to narrate why he wouldn’t turn down an opportunity to play with KD, “And it’s like I’m not too proud to say KD’s one of the best players ever. So if like one of the best players wants to workout with you and I could learn something from him, Why would I say no? If you worry too much about what other people think you’re going to say you’ll drive yourself crazy. It’s crazy that I can’t work out with somebody.”

This was extremely well worded. We are sure NBA players are scrutinized for their simple moves like playing with other stars. Hopefully, this all reduces and players can be free. At least in the NBA offseason.