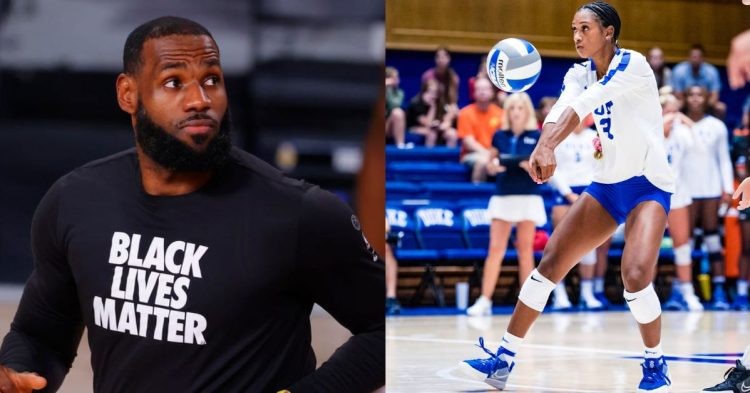 The racism in sports is becoming worse day by day. When we hear the word, our minds automatically think of the discrimination that black people face. However, that’s not what racism is all about. It’s about abusing innocent people both verbally and physically for their race, or color. There have been many advocates for this across the world, but LeBron James has always been one of the biggest of the lot.

The former Cleveland Cavaliers player is a black athlete who strives to bring forward everyone around him at all times. LeBron has always used his platform to help raise awareness about how the world shoves black people aside every day. Recently, a young girl faced abuse in a college volleyball game. The Los Angeles Lakers star voiced out once again.

Lesa Pamplin, a former prosecutor, tweeted on Saturday about how her goddaughter, Rachel Richardson, faced racial abuse. She said, “My Goddaughter is the only black starter for Dukes volleyball team. While playing yesterday, she was called a n****r every time she served. She was threatened by a white male that told her to watch her back going to the team bus.”

It is 2022 and it is disappointing that people are still angry and focused on the wrong things. Adding on to that, abusing and taunting someone for their race is unacceptable. LeBron responded to Pamplin.

@LesaPamplin, you tell your Goddaughter to stand tall, be proud and continue to be BLACK!!! We are a brotherhood and sisterhood! We have her back. This is not sports. #striveforgreatness #morethanavollyballplayer 🤎🤎🤎✊🏾👑 https://t.co/kMveNLKp5h

LeBron James tweeted, “[Lesa Pamplin], you tell your Goddaughter to stand tall, be proud and continue to be BLACK!!! We are a brotherhood and sisterhood! We have her back. This is not sports.” As LeBron said, the young lady should feel proud of her race and not heed any of the comments. LeBron also mentions that the community is a “brotherhood and sisterhood”.

It does help to bring unity to the people who face abuse, to let them know that they are not alone. With what LeBron said, Rachel will surely be able to ignore the negativity in her life when she is doing something she loves. Not many would take the time out of their day to support random people. But for LeBron to do that with the platform he has, speaks at length about the kind of person he is.

BYU even spoke out on the situation and mentioned the measures they took as a response. “BYU has banned a fan who was identified by Duke during last night’s volleyball match from all BYU athletic venues,” the statement included.

Rachel’s father, Marvin Richardson also commented on the incident. “Why wasn’t the fan removed? After the notification was made to officials and the coaching staff was made aware, why wasn’t something done then? That would be my question”, Marvin said to the Salt Lake Tribune. “I don’t know why you would ask a police officer to stand on the floor unless there is a fear that something is going on that shouldn’t be happening”, he continued.

I just talked to Marvin Richardson, the father of Duke volleyball player Rachel Richardson, who was called the N-word and threatened yesterday. Today, she was supposed to meet with the @BYU athletic director and vollyball head coach. But head coach Heather Olmstead didn’t show up https://t.co/7DJM62ugvR

That incident on the night was not the only unacceptable act. According to popular TV personality, Roland S Martin, BYU’s head coach Heather Olmstead did not show up to the meeting the next day. The university arranged a sit-down for Rachel with the athletic director and Heather, who did not even attend the meeting.