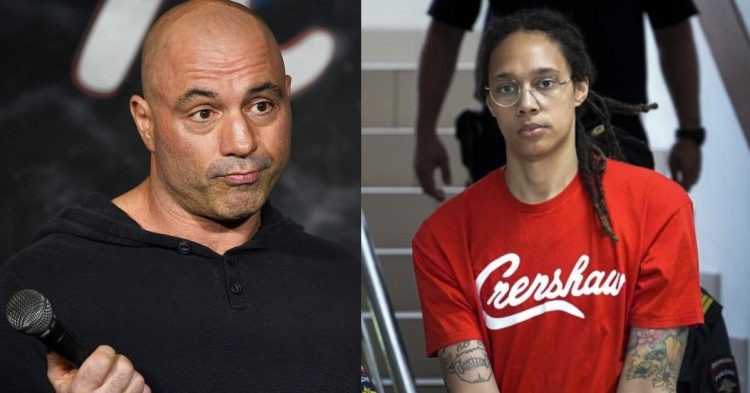 For the better part of the year, we have been hearing about WNBA star Brittney Griner and her case in Russia. She was arrested for carrying concealed marijuana vape cartridges and proceeded to plead guilty to the crime. Be that as it may, she was dealt with a harsh sentence of 9 years in prison. Sports commentator Joe Rogan recently discussed Griner’s case.

This is quite a sensitive and complicated issue. Brittney is somewhat of a celebrity being a WNBA star and all. However, the Russian authorities seem to have not taken that into consideration as a positive point at all and dealt her a tough sentence.

We all know how people from the  United States behave when it comes to issues like this. Rogan addressed exactly that and shared how he felt about this whole situation.

Joe Rogan asks about the difference between Brittney Griner and a prisoner in the U.S.A

We all sympathize with Griner’s situation at some level. Committing a mild crime in hostile territory and facing serious life-altering consequences is scary. However, there is a suggestion that seems to float around involving a prisoner swap in an attempt to free Griner. Joe Rogan criticizes this with passion.

“Like how about this Brittney Griner situation? Brittney Griner is in prison right now in Russia. Because she went over there to play basketball and she had uh cannabis oil vape cartridges that she had on her. I don’t know if she just didn’t know they were illegal or tried to sneak them in They’ve got her arrested it’s against the law and she might do 10 years in jail which is horrific and she’s already been over there for months But here’s what important. People are freaking out about this. Russia needs to let her go.”

Joe went on to bring the issue home, “We have people in America right now locked up for marijuana and they’ve been locked up for fu*king years and years. There’s not one there are thousands of them so what? they’re not good at throwing a fu*king ball into a net. Is that what it is they’re not good at that one thing we don’t like to watch. So those fu*king people don’t get let out?”

He certainly makes a valid point. Over half a million people are arrested every year in America for Marijuana related crimes. In fact, it accounts for almost half of all drug arrests alone. Forbes reports that around 545, 600 people were arrested for weed just in 2019.

None of them are being discussed because they aren’t professional players in a minor league. Rogan finds this ridiculous and pointed it out.