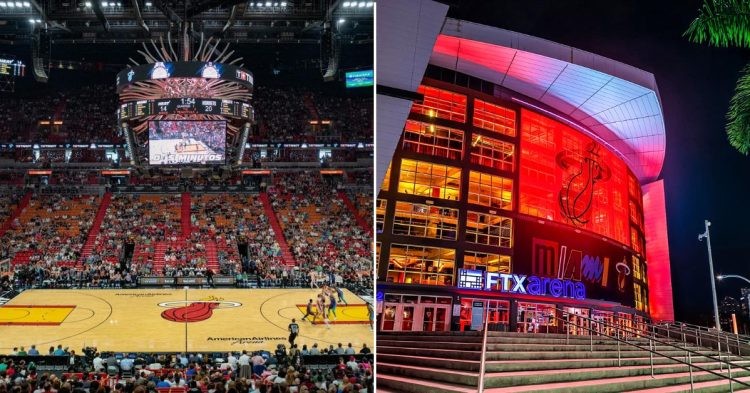 The Miami Heat are one of the most popular NBA teams. They have had legendary players like LeBron James and Dwyane Wade in the past. With that said, the naming rights to their stadium have become quite essential in recent times. Their home arena is currently known as the “FTX Arena.”

REPORT: Bang Bros is resubmitting a bid to the Miami Heat for the naming rights of the arena.

Popular adult film website Ba*gBr*s has made a bid recently, to acquire the naming rights to the Miami Heat’s home arena. It has caught the entire NBA world off guard since no one expected the website to shift its marketing approach through an NBA team.

How much has Ba*gBr*s offered for the Miami Heat arena?

According to various reports, the site has submitted a bid of $10 million, in an attempt to land the naming rights to the arena. If the site lands the rights to the center, they will be taking over from FTX. For those who don’t know, Sam Bankman-Fried is the CEO of the company. FTX is one of the largest cryptocurrency exchanges in the world.

Recently, the company’s customers had their doubts about whether FTX had sufficient capital to keep itself afloat. Due to this, the entity’s officials decided to sell it to their rivals, Binance. However, the purchase could not take place due to many complications in their agreement. Hence, FTX had to file for bankruptcy a few days ago.

In addition to that, the Miami Heat, and the Miami-Dade County have announced that they will be ending their partnership with FTX.

Miami-Dade County and the Miami HEAT have released the following statement pic.twitter.com/ERZo1IsZ2o

The statement mentioned, “Miami-Dade County and the Miami HEAT are immediately taking action to terminate our business relationships with FTX, and we will be working together to find a new naming rights partner for the arena.”

The end of their short relationship indicates that the Heat is in search of a new sponsor to acquire the naming rights to their arena. According to ESPN, the company had agreed on a $135 million deal with the Heat franchise, for the naming rights. Both parties signed the deal in 2021 and aimed to honor it till 2040, making it a long 19-year contract that spans almost two decades.

However, things have not gone well for the Bahamas-based entity. Their deal has been suspended and the Heat are in the market for a new suitor. We still do not know if the franchise will be accepting the adult film website’s offer of $10 million.