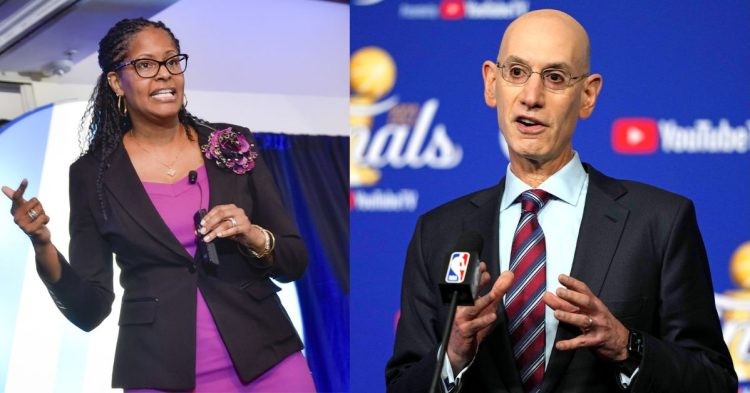 The NBA has decided to make Lesley Slaton Brown its new Chief Diversity Officer. As we might be aware, we are still in a time of discrimination based on race, color, and other ideologies. Although several prominent personalities have attempted to do away with this, it is still a rampant problem in society.

Although the NBA has more African-American players, it is not really considered by many as a place that focuses on Equity and Inclusiveness. Even though superstars like LeBron James are treated well, that does not mean racist behavior does not take place. Lesley was brought into the ranks with the hopes of changing the league for the better.

That said, NBA fans might want to know more about her and her qualifications so far. Additionally, understanding her goals and ideologies will also give us a vague picture of what to expect in the near future.

Lesley Slaton Brown has quite a resume. She worked as the Vice President for HP, a laptop manufacturing company that many of us are familiar with, for over 20 years. A few people might remember that she created a racial equality task force within the organization following George Floyd’s death via Police brutality and the following protests.

The NBA names HP, Inc.’s Vice President and Chief Diversity Officer Lesley Slaton Brown as the organization’s new Chief Diversity, Equity and Inclusion Officer. Brown will be responsible for driving ongoing DEI efforts for the NBA and its teams. pic.twitter.com/V9yh2ggqH7

She also has a passion for basketball, playing at a collegiate level for Boise State Broncos. Considering that she could be considered a revolutionary in terms of workplace conduct and other inclusive behavior, the NBA gave her this position. She is expected to take over and begin her term on February 1st 2023.

Slaton has many goals as the CDO of the NBA. According to the league, her role will be “to implement and advance DEI processes, including the recruitment and retention of diverse talent, the development and enhancement of employee resource programs, and setting and assessing metrics for success.”

To those who do not know, DEI refers to Diversity, Equity, and Inclusion, the pillars of her work so far. DEI allows people from different backgrounds to feel comfortable and welcome. Moreover, it prevents many forms of partiality that have been seen in multiple organizations across the world.

Lesley released a statement after we found out she would now be working with the NBA, “I’m honored to join the NBA at such an impactful time for a business that has a unique influence on our culture I’m excited to bring my passion, knowledge and deep understanding of best-in-class strategies to the industry.”

It is unclear whether Brown will make an impact on the underlying practices of discrimination that the NBA still engages in. Nonetheless, we wish her all the best in this new endeavor.

What is Victoria Beckham’s Net Worth in 2023?