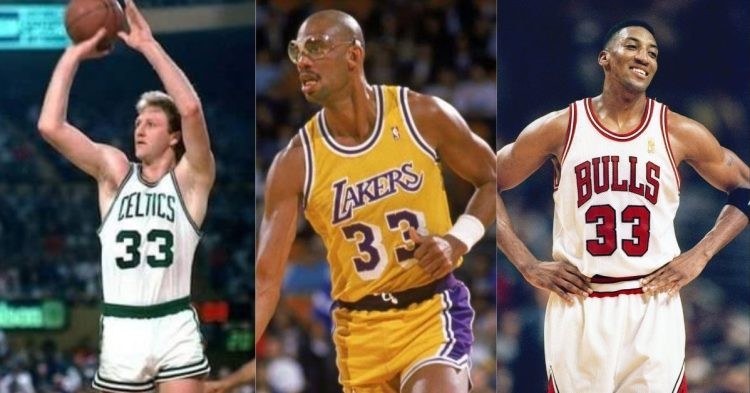 Jersey numbers have always been a trademark in the NBA. A few particular numbers hold significant value in the league. One such number would be Michael Jordan’s 23, for example. He left a legacy so great that two different teams retired his number.

Another legendary number in the league that players wore over the years would be the No.33. Many legendary players have worn the number throughout the history of the league. But what makes it so important?

Who were the greatest NBA players to wear jersey number 33?

One of the greatest players to wear the number would be the one and only Kareem Abdul-Jabbar. The Lakers & the Bucks retired the number to pay tribute to the NBA legend. They were the only teams he played for during his career.

On this day in Lakers history, Kareem Abdul-Jabbar’s No. 33 jersey went up in the rafters forever.https://t.co/VPPfjKsioS pic.twitter.com/94Y2I5idqA

Kareem boasts 6 rings to his name, together with 6 NBA MVPs, 2 Finals MVPs, and many more accolades. The former star is still the all-time leading scorer in the NBA with 38,387 points. Astonishingly, he retired in 1989, and no one has managed to catch up to him.

Another player that wore the legendary number was Larry Bird. The Boston Celtics legend wore 33 throughout his 13-year career in the NBA which ended in 1992.

28 years ago today, the Celtics retired Larry Bird’s #33 jersey to the rafters of the Boston Garden.

Bird won 3 NBA Championships and 2 Finals MVPs back then. Not only that, he became a legend because of how he played. He was everything on the team, scorer, defender, playmaker- you name it. Larry was the last player in recent times to win the NBA MVP back-to-back three times. No one has managed the feat ever since. The Celtics retired his number a year after he decided to put a stop to his playing career.

Scottie Pippen was one of the players that wore 33 in his career. He wore the number for the Portland Trail Blazers and Chicago Bulls, where he made a mark. Many called him Michael Jordan’s partner on the path to greatness with the mighty Bulls team then. Scottie also has 6 championship rings to show for, all of which he played an extremely crucial role in.

The number 33 became legendary along the way as these great legends made the #33 iconic which will be a symbol for their legacy.