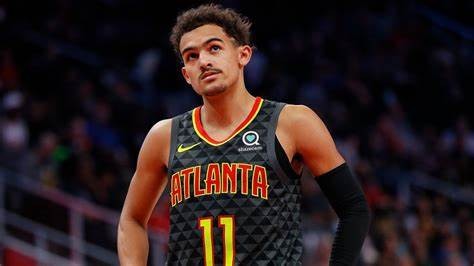 Trae Young is one of the young stars to watch out for in the future. He came into the NBA as a young Point Guard and was a first-round pick by the Dallas Mavericks. He was traded to the Atlanta Hawks in exchange for Luka Doncic.

He is always talked about, be it his crazy handles and playmaking or the shots he can take from the Logo. However last postseason the sweet and young, Trae Young came out as a cold villain.

Put Reggie Bullock in the MSG rafters for trying to blow the rest of Trae Young’s hair off his head 😂😂 pic.twitter.com/rW0kmyNqmZ

‘Trae Young is Balding’, is what the Knicks fan were chanting at him. It does seem immature to be making fun of a guy’s hairline but the fans really do want to know what is up with Ice Trae’s hair.

What Is Wrong With Trae Young’s Hair?

Trae Young seems to have some issue with his hair. People cannot seem to understand if that’s the way actually is or if the NBA star has no time to fix it.

It sometimes seems like Young decided to take a nap right before the game. Fans have been creative with the memes and some of them have outright just said that an NBA star has terrible hair.

trae young should boycott #NBA2K19 for making his hair too realistic lmao pic.twitter.com/Gk0g7U8ecE

Trae is not someone to keep quiet when he knows he is in the driver’s seat. The young star took time to provide an explanation as to why his hair is fine just the way it is

My hair is different that a lot of people’s. I like my hair. I like the fade. I like the little design I have. I’m cool with it. Obviously, my hair is thin on the top, so it looks like a bald spot. But I really could care less. If that’s what makes them sleep good at night.. I’m cool. I’m sleeping good.

With the way, Young is building himself in the NBA the real question is does his hairline really matter?

The Kardashian Curse: Is Devin Booker the First Player to Break It?