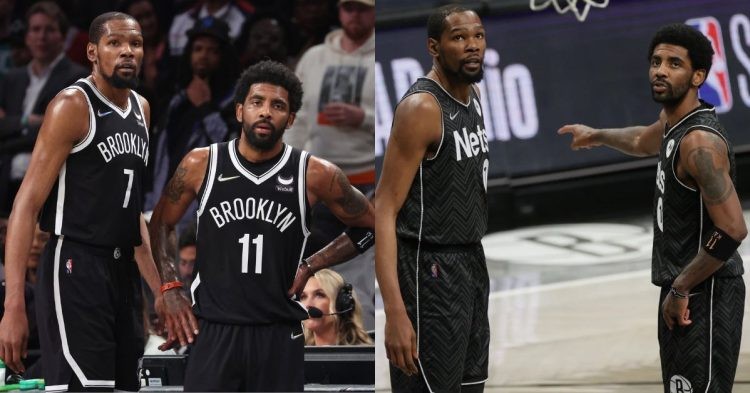 The Brooklyn Nets have been grabbing the headlines for the whole of this month. One of their star players, Kyrie Irving caught the attention of the world when he promoted a movie that included anti-Semitic views. Due to this, the entire NBA world turned against him. Nets owner Joe Tsai sent out a warning to him, and the franchise suspended Irving without pay for at least 5 games.

The New York-based franchise gave a list of things for Kyrie to do if he wanted to play for them again. In his absence, the Nets were doing well, just for a few games, however.

The last time Kyrie played an NBA game was against the Chicago Bulls on November 1st. Since then, the Nets have put up a record of 5-3. The only games they lost were the ones against the Dallas Mavericks, LA Lakers, and the Sacramento Kings. In the meantime, Nets star Kevin Durant has caught the eye of the world as well.

During an interview with Bleacher Report, Durant said, “Look at our starting lineup. Edmond Sumner, Royce O’Neale, Joe Harris, Claxton and me. It’s not disrespect, but what are you expecting from that group? You expect us to win because I’m out there. So if you’re watching from that lens, you’re expecting us to play well because No. 7 is out there.”

Although it may seem otherwise, the 2x NBA champion mentions that he means no disrespect to the Nets’ starting 5 right now. KD’s comments indicate that he isn’t happy with the Nets roster and that he isn’t surprised by the disappointing results that the Nets have had this season. They have a record of 7-9 in the 2022-23 NBA season so far.

Can Kyrie Irving and Kevin Durant save the Brooklyn Nets’ season?

In addition to that, the former Golden State Warriors superstar claims people expect the team to win only because he is out there. Although the Nets have done quite decent in Kyrie’s absence, Durant has been extremely consistent in leading the team on the court. Together with that, Seth Curry has been performing for them as well, when needed.

According to recent reports, Kyrie will be back on the court soon. What does that mean for KD? One thing that’s for sure is that it will take the pressure off the latter. Since the board suspended Kyrie, Durant has averaged 28.8 points, 7.5 rebounds, and 6.0 assists.

When Kyrie comes back, he might be able to have another superstar on the roster, which he feels the team lacks right now. Both of them have complemented each other’s playstyle and have grown to play better together. The Nets have not won many games this season. However, Kyrie and KD put up 74 points together on the board in the 134-124 loss to the Memphis Grizzlies back in October.

It’s just what @KDTrey5 does. pic.twitter.com/5gAvAQFupa

Many haters may claim that the Nets might continue their losing form after Kyrie’s return. But a major change that Joe Tsai has made behind the scenes is hiring a new head coach in Jacque Vaughn. Durant has also mentioned that he is quite comfortable working with Jacque. Only time will tell if Kai and the Slim Reaper can work together to save the Brooklyn Nets’ season under the new coach.