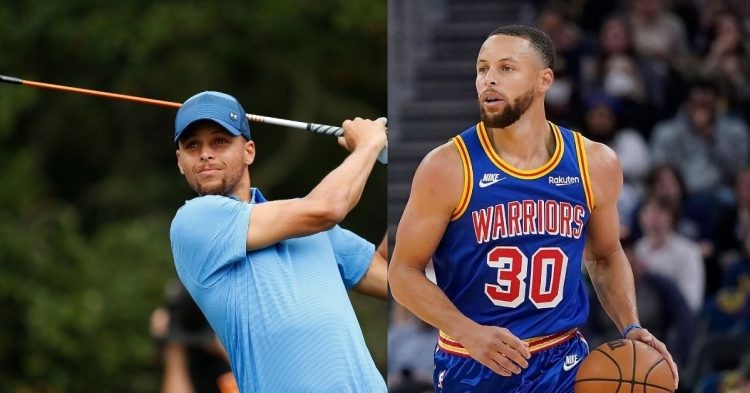 Stephen Curry and the Golden State Warriors have made the NBA Finals. They face Jayson Tatum and the Boston Celtics to try and win an NBA title. As the clock ticks down for game 1, one must wonder how Curry is spending his time

Steph and the Warriors eliminated Luka Doncic and the Dallas Mavericks in 5 games. Therefore, they had much more time to rest than the Celtics, who went 7 games with the Miami Heat.

Stephen Curry is using golf to prepare for the NBA Finals

Chef Curry may average ridiculous numbers in the NBA. However, he is also an avid golf lover, and it is probably his favorite sport, next to basketball. Some footage was found of Chef Curry totally prepped up in golf gear. One must wonder why Curry spends time on golf in the first place?.

Steph’s just living his best life on off days 😂

Steph has explained on occasions in the past, how golf has also had a significant impact on his life. He has always understood that sports are based on privilege. Only elite top-tier athletes have a shot in basketball. Therefore, if they are not financially stable this may not be enough on its own.

This is the same case for golf. Additionally, it is considered much more of an elitist sport. It may not require the same skillset as basketball. However, there are many other limitations that prevent athletes from pursuing the sport.

Some of the common reasons are financial status as well as societal and racial status. Thankfully, Steph was from a considerably well-off family. His father was an NBA player. Therefore, he was definitely given more access to golf as a recreational activity.

Curry knows that everyone is not as privileged as him. Additionally, he is also magnanimous enough to acknowledge that people admire and pursue different sports. Therefore, he has always promoted golf alongside basketball.

The NBA Finals approach and it is good that Steph is getting his recreational therapy in. He will need to be at his best for the Golden State Warriors to topple the Boston Celtics.