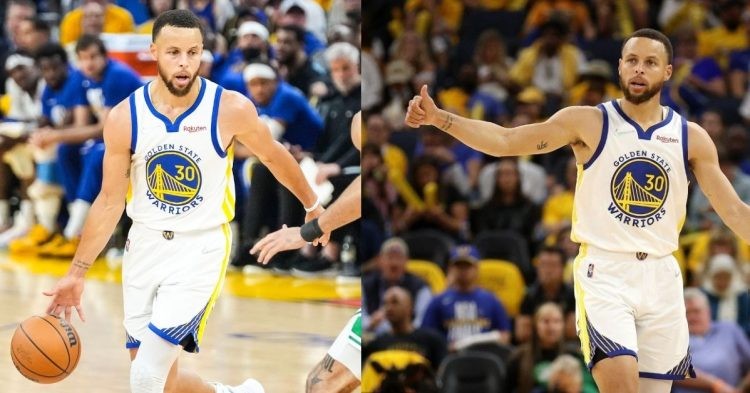 Stephen Curry has always meant business. It could be on the court or off it. The Chef has stepped up when needed and all of us know he’s worth every penny. He has recently helped the Golden State Warriors to win their 7th NBA Championship and he also won his first ever Finals MVP award. Although it took a while, there is no doubt that he is the deserved winner.

A month ago, the Warriors won against the Boston Celtics in 6 games to make the title their own. However, in the first game, things did not go in the way of the Bay. The Celtics won 120-108 as Jayson Tatum, Al Horford & Jaylen Brown all put on a show in Boston.

In that game, Steph was on fire. He made 34 points, 5 rebounds, and assists each. His performance was brilliant only from an individual perspective. Despite the loss, there is no doubt that he was feeling himself that day. The Warriors star hit six 3-pointers in the first quarter itself. The record, most 3-pointers hit in a single quarter in an NBA Finals game, was his own after that. Have a look at how he did it here.

His performance met that his jersey was one of a kind. NBA Auctions sold the jersey that Curry wore that game for a whopping $203,330. More than 100 bidders were looking to make the jersey their own in that auction.

This wasn’t the first time a Curry exclusive has gone at such a high price. Last month, the jersey he wore in Game 1 of the 2016 NBA Finals was sold for about $340,000. A few days before that, a 2009 Playoff National Treasures Curry RPA (rookie patch autograph) numbered 99 was also sold. The price that it went for was $720,000. It seems like the prices of Curry’s collectibles went up after the successful season he just had.

That’s not the only explanation for it. The auctions also happened after he became the all-time leading 3-point scorer. Stephen Curry sits comfortably on the throne and he still puts up more and more threes every game and doesn’t show any signs of slowing down.