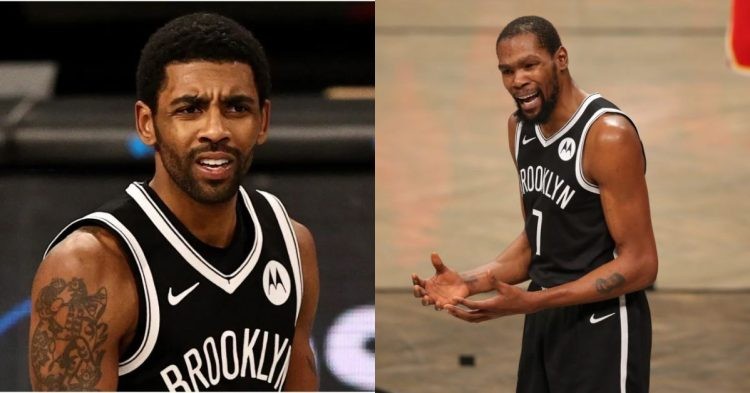 The storylines for the 2022-23 NBA season are beginning to be set in stone. One of them would be about how well will the players that received these huge contract extensions perform? Others could be about some key trades being made by rosters that looked like they had no hope. But the one that will hold the most precedence will be related to where Kyrie Irving and Kevin Durant end up at the end of this off-season.

REPORT: KD and Kyrie Irving teaming up again “is certainly a possibility… they want to continue to play together, but the sense is they don’t want to do it in Brooklyn anymore.”

The 2022-23 off-season was supposed to be about stars like Bradley Beal and where he could be joining. But the bombshell of Rudy Gobert, Dejounte Murray, Kyrie Irving, and Kevin Durant trumped it all. Every season we say that this was the greatest off-season. But for the first time, we could actually mean it because of how much these trades could mean to shape up the road to the NBA finals.

Why have the Los Angeles Lakers been passive with KD and Kyrie Irving?

The Minnesota Timberwolves’ trade with the Utah Jazz for Rudy Gobert has changed the value for NBA superstars in the league. Malik Beasley, Patrick Beverley, Jarred Vanderbilt, Leandro Bolmaro, number 22 pick Walker Kessler and four first-round picks were involved in this trade. However, that many picks and players for a 1-dimensional superstar are an overpay. The trade came from a place of desperation for Minnesota.

Rudy Gobert has turned into one of the most overrated players in the NBA. But his value has been inflated for a while. And you saw that with his $200 million contract for a player that averages less than 15 points per game. It has shown the Brooklyn Nets what the value for Durant and Kyrie could be for the right desperate team.

According to Woj, the Nets are expecting almost 5 first-round picks coupled with an all-star caliber player for Durant. And that sort of deal needs multiple teams and time to be able to orchestrate. And with Kyrie the situation gets worse as the pool of teams willing to trade for a superstar on an expiring contract is small.

The Los Angeles Lakers are the biggest suitors for both these stars. But have almost no assets since the Anthony Davis trade. They would be working on something behind the scenes. Which is why it looks like there is no traction or passiveness from the Los Angeles Lakers. And this entire situation could be dragged out for at least a week or so.