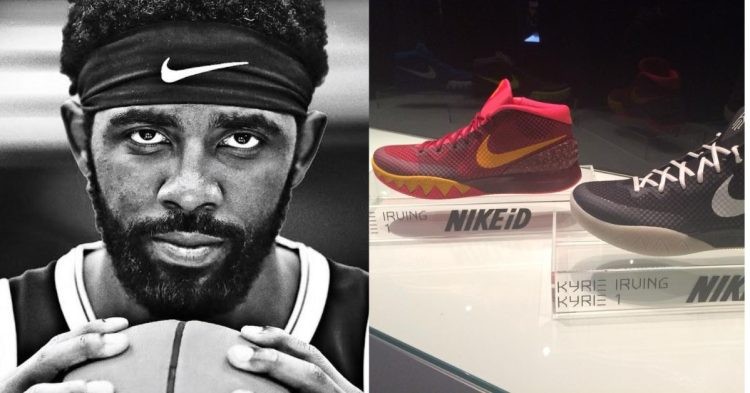 Kyrie Irving has been associated with Nike for as long as 11 years. Throughout his career in the NBA Kyrie has had 7 signature shoes. Kyrie’s shoes are one of the coolest and most aesthetically pleasing shoes that Nike has ever produced.

The most special thing about the first shoe Nike produced for Kyrie was the significance of the numbers 9-9-96 that were imprinted on his shoes.
What’s special about the number is that right next to it Kyrie made Nike stitch his mother’s name and 9-9-96, the day when she left for her journey through the clouds.
Apart from being a prominent Nike athlete, Kyrie has also played with some of the best Nike athletes ever. Kevin Durant of the Brooklyn Nets and LeBron James of the Los Angeles Lakers are 2 such Nike athletes.

Kyrie has been a Nike athlete throughout his career. He signed his first deal with them right after he became the no.1 pick in the 2011 NBA draft. Shortly after Kyrie signed his deal with Nike, the two of them together came out with Kyrie’s first signature shoe in 2014.

Since then the Kyrie 1’s have become some of the most iconic shoes in Nike’s lineup. Unfortunately, amidst the recent controversy that occurred after Kyrie promoted an antisemitic film on Twitter, Nike has decided to suspend their relationship with Kyrie.

This came as a big blow to fans as Kyrie’s signature shoes are some of the best shoes ever. Kyrie’s fans might never get to see what the Kyrie 8 looks like if their relationship gets terminated.

Who is Kyrie Irving’s mother?

Elizabeth Irving is Kyrie’s birth mother. Unfortunately, Kyrie doesn’t have many memories of his mom as she passed away from an illness when he was 4. Still, she must have been a big part of Kyrie’s life as he even decided to pay a special tribute to her on his first-ever signature shoes.

The end of an era for the Nike Kyrie shoes

Which one was your favorite model? pic.twitter.com/s5lwuzj4Kb

Kyrie has always been known for special things like this tribute. Hopefully, Kyrie’s relationship with Nike is salvaged and the two of them continue to work on more shoes together.