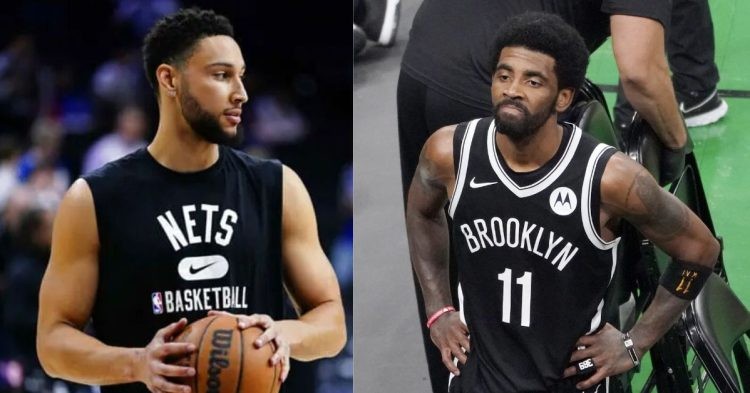 Ben Simmons has not suited up and played in the NBA for a long time now. We last saw him in action during the second round of the Eastern Conference playoffs.  His team, the Philadelphia 76ers lost to Trae Young and the Atlanta Hawks despite being considered the favorites to win that series. Additionally, Simmons was blamed and scrutinized for some of his plays and end-game behavior.

He did not start the next season for his team and sat out. Simmons also cited mental health issues as a reason for his struggles on the basketball court. Thankfully, all of that is in the past and he now has a new team. Kyrie Irving, Kevin Durant, and the Brooklyn Nets seem to still be on good and confident terms with Ben.

This should be somewhat surprising considering that Ben Simmons never played for the Nets last season despite having a fresh start. Nonetheless, Kyrie Irving revealed that he is very confident about and likes what he sees from Simmons.

Kyrie Irving compliments Ben Simmons for his resolve and resiliency

There are very few players in the NBA or even the world who can claim to be deeper thinkers than Kyrie. He is a man who is more known for his eccentric behavior and less for his philanthropic acts and beliefs.  Kyrie can probably understand what Ben is going through much better than any of us.

Irving’s faith in Ben Simmons is far greater than what we predicted, ” His resolve and resiliency. He wants it. Whatever greatness looks like for him, he wants it… When you look around other people and you’re in a great environment where you can be supported when you’re going through your ups and your downs, I think that can help ease the journey”.

Kyrie certainly makes a valid point on how important an environment and a support system is for the development and mental health of a pro athlete. However, we should wonder if the Brooklyn Nets culture is really that much more beneficial in comparison to the 76er culture. Some of the players who can discuss this issue would include James Harden, Ben Simmons, and Seth Cury.

In any case, we hope Kyrie is right about the environment his team provides. That would mean success for the Brooklyn Nets this upcoming season.