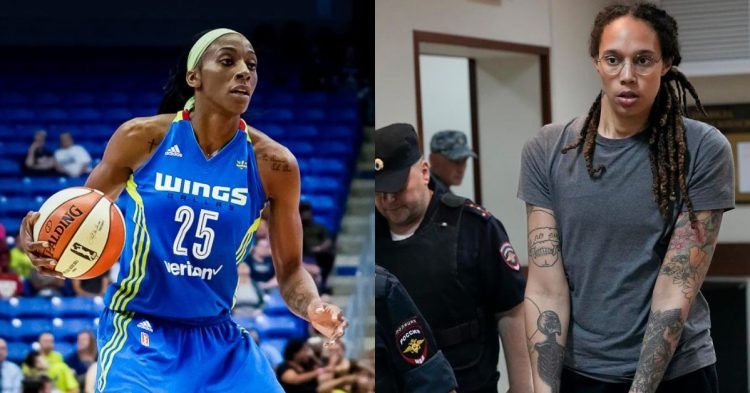 Brittney Griner has been in a Russian prison for over 5 months now. She was detained earlier this year for carrying weed vape, something which is illegal in Russia and she did so during the very start of Russia’s war with Ukraine. As a result of this, she has been sentenced to 9 years in prison. The exact location of Griner remains unknown after she was transferred to the Russian Penal Colony to serve her 9-year sentence.

A few years before all of this, Brittney was actually a WNBA star. She was even married to another player in the WNBA Glory Johnson. Although, their tumultuous marriage came to an abrupt end after reports of domestic violence started surfacing.

Glory Johnson leading up to the divorce accused Brittney of getting violent with her while she was pregnant. Though that doesn’t mean that she isn’t bothered by the whole prison situation. This is what she had to say about Brittney post their divorce. “After all the things that she put me and my family through, I should hate this person. But at the end of the day, I still worry about how she’s taking all this.”

Shortly after she split up with Glory Johnson, Griner got married to her current spouse Cherelle Griner.

Glory Johnson, despite her differences with her ex Brittney, was in full support of her and even went as far as to say, that Brittney has a beautiful soul and sometimes makes rash decisions. She even posted a beautiful heartfelt message on Instagram explaining how she cares for Brittney and wants her to come home.

We believe that this must be a tough time for Brittney and all the people that are associated with her. The only thing that Griner’s friends and family have been asking for is for her to get back home safely.

Will we ever see Brittney Griner in the WNBA again?

Despite all the controversies Brittney Griner still has people in her corner who care for her. Even NBA superstars like LeBron James of the Los Angeles Lakers and Stephen Curry of the Warriors spoke out about how she has been wrongfully imprisoned and should be released.

LeBron James joined the growing voices calling for WNBA star Brittney Griner’s release from Russia, where she has been detained on drug charges for over 100 days, as the NBA community becomes increasingly more supportive of her cause. https://t.co/7TUF7ajOJX pic.twitter.com/RxGWBondtq

Hopefully, The US government can crack a deal with Russia and bring Brittney Griner home again. If she can get back home safely, then it’s almost inevitable to see her in a WNBA uniform again.