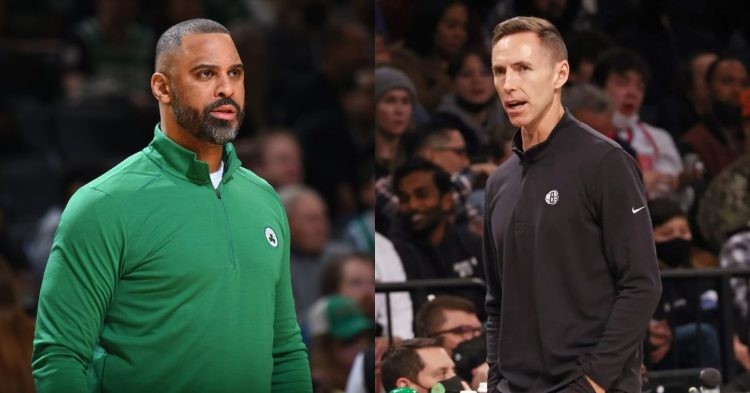 The Brooklyn Nets have been the hottest topic in the NBA in recent times. Mainly for the Kyrie Irving controversy, which involved the player publicly apologizing. The other reason was that they fired their head coach Steve Nash. In the last few months, there have been various reports of Kevin Durant wanting Nash to leave Brooklyn. This prompted many to speculate that KD had a role to play in his sacking.

The Nets organization has moved on now and is currently looking for a replacement. One of the coaches available in the NBA world right now is Ime Udoka. According to reports, the Joe Tsai-led franchise is close to agreeing on a deal with Udoka. However, it seems like fans are against Ime’s recruitment.

For those who don’t know, the Boston Celtics hired Ime Udoka as their head coach at the start of the 2021-22 NBA season. His journey became extremely successful in the first year as Ime led the young Celtics team to the NBA finals. Before the 2022-23 NBA season kicked off, the Celtics franchise suspended the 45-year-old for the whole season.

Celtics coach Ime Udoka had an improper intimate and consensual relationship with a female member of the team staff, sources tell @TheAthletic @Stadium. It’s been deemed a violation of franchise’s code of conduct.

What Udoka did caught the entire world off guard. Reports emerged at the time saying that he had been having an improper relationship with one of the female staff at the Celtics.

“I want to apologize to our players, fans, the entire Celtics organization, and my family for letting them down. I am sorry for putting the team in this difficult situation, and I accept the team’s decision. Out of respect for everyone involved, I will have no further comment,” he said in a statement.

There has been some concern from women in leadership positions within the Nets about hiring Ime Udoka, per @AdamZagoria

“[Nets owner] Joe [Tsai] is getting some blow back” and there’s “too much potential drama,”

It seems like the Nets board have laid its eyes on Udoka. The former Celtics coach has been the frontrunner for the job ever since Nash was fired by the franchise. An interesting fact is that Udoka was working as an assistant coach under Nash during the 2020-21 season. However, there have been latest reports that mention that there is a strong objection from within the Nets organization.

The main reason for the objection from the Nets officials would be the damaged reputation. Ime Udoka was suspended by the Celtics for a violation of team policies and he remains suspended till now.

Due to this, the Nets might have to reconsider whether Udoka is right for the role since that will also attract plenty of backlash for them from fans. After all, the Nets have been under the spotlight for quite a while now and they might want to avoid it this time around.