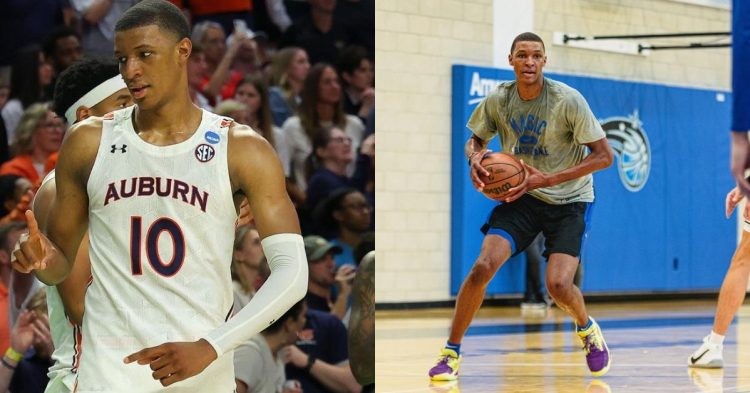 Jabari Smith Jr. tops the list of multiple mock drafts for 2022. Now, that the NBA Draft is almost here this is the perfect time to shed some light on who this baller is and what he’s capable of.

Jabari Smith is a 6’10 220lb forward, he is tall, fast, and strong. That’s a combination that almost any NBA team can make use of, but his skills go way beyond his physical capabilities. He averaged 16.9 points, 7.4 rebounds, and 2.0 assists per game during his first season at Auburn he did all of this while shooting 43% from the field and an amazing 42% from the three-point line.

The NBA Draft is Thursday night and @KrystenPeek has her final Mock Draft Projections.

Will Jabari Smith still go No. 1 to the Magic? 🤔

Additionally, at the defensive end, he averaged about 1.1 steals, and 1.0 blocks per game, and his strength and speed combined with his size allows him to guard almost every position. At 6’10 he is one of the best shooters in this year’s draft class.

Jabari Smith Jr. is almost guaranteed to be a top 3 pick in this year’s NBA Draft

Jabari can guard anyone on the court, He can shoot from almost anywhere, and his size and athleticism allow him to shoot over almost everyone. This big man can do it all on a basketball court and that is likely to attract the attention of every team in the NBA. Additionally, his NBA-ready body, smooth jump shot, and defensive skills are enough to immediately have an impact on most teams.

Auburn’s Jabari Smith Jr. getting some work in. pic.twitter.com/wiVAXKwdtP

The last time we saw the argument of a big man as the best shooter in their draft class, it was Kevin Durant. With a little polishing and experience, Jabari Smith Jr. can do great things. Additionally, teams don’t have to bet on his experience, he has proven his skill over and over again during his time at Auburn. The Magic will probably end up drafting him with their No.1 pick and it’ll be an amazing decision for them as a franchise.