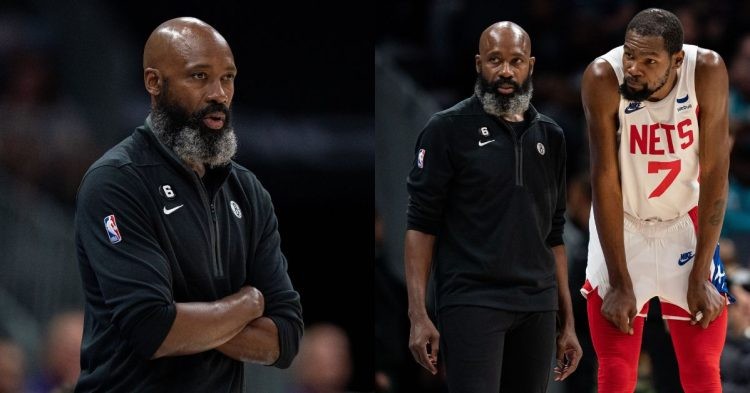 The Brooklyn Nets fired their former head coach Steve Nash earlier this month. The main reason for that would be the disappointing run of form they have had in the 2022-23 NBA season so far. The move by the franchise caught the NBA world by surprise as many believed Nash would stay due to Joe Tsai’s backing during the Kevin Durant saga. However, it seems like that wasn’t the case.

There were many rumors about who might replace Nash, including suspended coach Ime Udoka. The Nets have put those rumors to bed after hiring a new coach in Jacque Vaughn today. He has been behind the scenes most of the time and not many know his history in the NBA.

For those who don’t know, Jacque Vaughn has been an assistant coach for the Nets team since 2016. Before that, he was the head coach for the Orlando Magic franchise from 2012 to 2015. He was fired by the Magic board when the results did not come along for the franchise despite major improvements made to the team’s roster. Jacque had a PCT of just .269 with the Magic.

However, he landed another job in Brooklyn with the Nets, as an assistant coach. When the Nets sacked Kenny Atkinson in 2020, Vaughn became the interim head coach. He led the team for a total of 10 games and managed to win 7 of them. He had improved on his previous PCT and managed to bring it up to .700 in those ten games.

The Nets team that Vaughn has now is quite different. He has a team filled with talented individuals, but also ones that have been involved in plenty of drama in recent times. That includes Kevin Durant and Kyrie Irving. The latter is currently suspended from the team for his controversial tweet a couple of weeks ago.

The Nets just announced they have named Jacque Vaughn as head coach.

Jacque had been serving as the interim head coach once again after the Nets let Steve Nash go. The team had a record of 2-6 when they fired Nash. Since then, Jacque has done quite a decent job without Kyrie Irving on the roster.

He has led the team to a 2-2 record in the 2022-23 NBA season so far since taking the reign. Although that may not be extremely high, it is a decent number considering the fact that he has given a good amount of game time to youngsters.