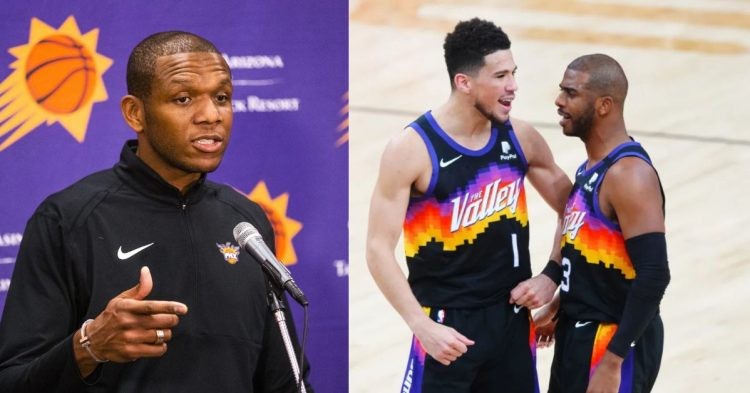 Phoenix Suns' GM James Jones in an interview and Devin Booker and Chris Paul on the court (Credit: Twitter)

In a decision that was well awaited by some, James Jones has become the new president of basketball operations and General Manager for an NBA franchise we are all familiar with, the Phoenix Suns.

This certainly begs a lot of Important questions. Fans already know how influential a GM is over the management and running of a team. Therefore, we should wonder who James Jones is, and understand his personal accomplishments. Moreover, learning about his journey to this position is also something fans might be interested in.

Some of us are already familiar that the Phoenix Suns are going through a lot of changes management-wise. After all, it changed ownership after the accusations against, and eventual departure, of the former owner Robert Sarver.

OFFICIAL: James Jones has been promoted to President of Basketball Operations and General Manager for the Phoenix Suns.

There is clearly a lot more to an organization than a sole man. James Jones is actually a former NBA player who was in the league for 14 years. It would interest some people to know that he played for Phoenix, along with many other teams throughout his playing career.

Jones was in the league from 2004 to 2017. As soon as he stopped playing professionally, He was named director of player personnel for the Phoenix Suns. This occurred on July 2017. A little over a year later, he was promoted to become an interim general manager for the Suns.

He certainly proved his worth in this stretch of time and made moves that have certainly caused improvement to the situation in Phoenix. He fired their former coach Igor Koskov within a single season of his employment. However, few can dispute this move in retrospect considering that Monty Williams soon coached the Suns all the way to the 2021 NBA Finals.

James Jones played an integral role in the hiring of Monty and made several other moves to the roster. Along with other changes and tweaks he made to the roster, this led the Suns to have one of the best regular season records in recent history.

It would appear that Phoenix has realized what Jones is worth. Therefore, they have promoted him to the head of basketball operations. We hope he has a successful corporate career with the Suns.