Who Is Smush Parker, Former NBA Player Looking To Make History by Becoming an NBA Referee 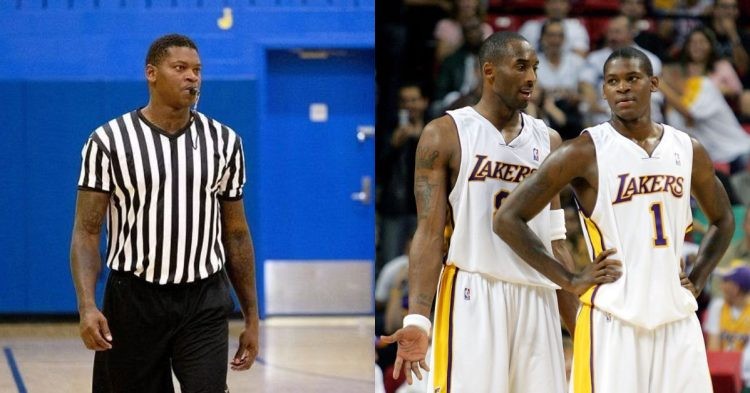 Smush Parker as an NBA referee and with Kobe Bryant on the court (Credit: Twitter)

Smush Parker, a former NBA player is trying to become an NBA official. It is quite rare for a player to try his hand at being an NBA referee. As some of us might have already heard, NBA referees are currently being scrutinized for making questionable and biased calls.

Nonetheless, Smush is looking to make history by being a referee who was a former NBA player. Fans must certainly want to know more about him and what he was like as a player. We need to take an in-depth look into his career. Especially, if he does end up becoming an NBA referee. Additionally, one might also be curious to know how many players have tried their hand at officiating in the past.

Smush himself revealed that there were only three former players in history to transition on to becoming NBA referees. They were Bernie Fryer, Leon Wood, and Haywoode Workman. Therefore, Smush Parker would be the 4th person to get on this list.

As for his life outside the league, Parker was born in Brooklyn and played college basketball for Fordham University. He entered the NBA in the 2002 draft and started off his career with the Cleveland Cavaliers. Smush was soon traded to the Los Angeles Lakers heading into the 2005-2006 season.


It would interest fans to know that Parker had many heated exchanges and altercations with the late Kobe Bryant. They never reconciled or made up for the rest of their lives. Smush also got into a little bit of trouble for a physical altercation with a parking attendant.

It is unclear what happened back then and his career soon came to an end. He played in multiple leagues overseas and has now decided to try his hand at being a referee. We wish Smush Parker the best and hope he manages to get the job. Hopefully, he will help change the image that officials are being branded with in current times.

What Is Stephanie McMahon’s Net Worth in 2023 After Resigning From WWE?