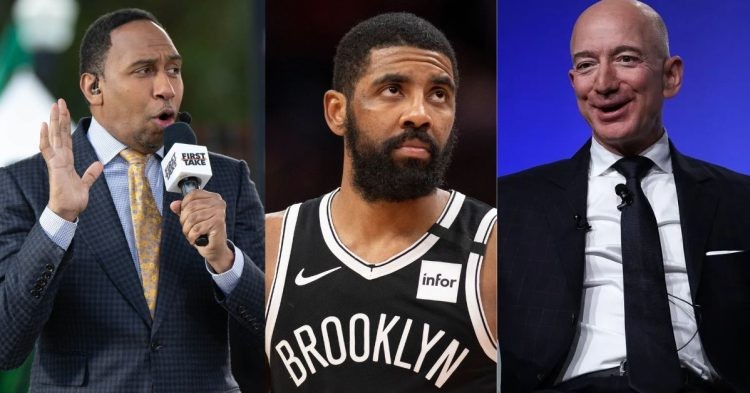 The entire NBA world is aware of the Kyrie Irving controversy that has shaken everyone up. The Brooklyn Nets star shared a movie and promoted it on his Twitter a couple of weeks ago. Not many received his tweet well and the NBA world turned on him. Adam Silver and Nets owner Joe Tsai condemned him and slammed his tweet publicly. The Nets then suspended Kyrie for a minimum of five games.

Amid this, American TV sports personality, Stephen A.Smith has taken a huge jibe at Amazon and its CEO, Jeff Bezos. For those who don’t know, the tweet that Kyrie shared was an image of the movie poster, which is available for sale on the Amazon platform.

Smith said on First Take, “Jeff Bezos, you’re supposed to be a better man than that. Get rid of that. Get that off your platform, please, since all of this noise is being made. Why, because he’s worth billions? And he owns Amazon, so we’re not gonna say anything about him, but we’re gonna rake Kyrie Irving through the coals.”

When will Kyrie Irving play again for the Brooklyn Nets?

Smith mentions that the world should also condemn Jeff Bezos since it has done the same to Kyrie. In addition to that, he believes that Amazon should take the film off its platform since it contains anti-Semitic views. The ESPN personality also hinted that Irving was a victim of double standards and that the world has not treated Jeff Bezos and Amazon the same way.

For context, Kyrie remains suspended by the Brooklyn Nets. Recently, Joe Tsai revealed that he met with Kyrie and his family, together with his wife.

Clara and I met with Kyrie and his family yesterday. We spent quality time to understand each other and it’s clear to me that Kyrie does not have any beliefs of hate towards Jewish people or any group.

Tsai mentioned that he can confirm that Kyrie does not have anti-Semitic views or any hate towards Jewish groups. Many believed that Kyrie will be allowed to come back to the Nets after Tsai’s tweet, but there has been no confirmation from the franchise.

After all, the Nets demanded to the 30-year-old that he agree to meet with both Joe Tsai and Jewish leaders. It was one of the things that the board listed to Kyrie, that he had to fulfill to play for them again. However, it seems like the controversy is slowly coming to an end as both Adam Silver and Joe Tsai reveal that Kyrie is not anti-Semitic.